The D.C. Conspiracy mails thank-you cards to folks who advertise its semi-annual Magic Bullet comics newspapers. For the current issue, MB #7--which has a Halloween theme--local cartoonist Matt Rawson did a Halloween illustration for the thank-you card. (It is loosely based on the Universal monsters chalk wall drawing he did this fall at Artisphere in Arlington, Va., as part of the D.C. Conspiracy's Comic Making Workshop and MB exhibit, which ends next weekend). 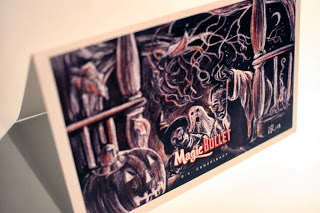 Posted by Matt Dembicki at 8:39 AM