Paul Pope will be at Politics and Prose and Takoma Park Library on October 10th.

Here's the press release from his publisher: 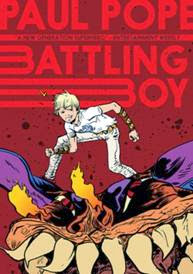 Boing Boing says, "You're going to love this," while The Huffington Post calls it "an instant classic," and MTV Geek "a rip-roaring superhero adventure for the ages."  "This book is a number one stunner," says Junot Diaz, while Brian K. Vaughan says, "there's more imagination in each page of this book than in whole years of other comics," and Jeff Smith calls it "the adventure of the year."

When Battling Boy's father (a warrior god) drops him on a world infested with bloodthirsty monsters, he leaves his son with nothing but a magic credit card, a trunk full of enchanted tee shirts, and instructions not to come home until he's liberated the planet from its plague of monsters.

It's one kid versus an entire world full of monsters – and the monsters don't stand a chance.

PAUL POPE is the New York Times bestselling author/illustrator behind the fiercely beloved comics The One Trick Rip-Off, Batman Year 100, Heavy Liquid, and100%. A master of gritty sci-fi epics, he's known for genre-bending storytelling and frenetic, stylish artwork. Paul Pope's art has been featured in places as diverse as LucasArts, Diesel Industries, and Cartoon Network, and DKNY. Widely considered to be one of the best and most influential cartoonists today, Paul Pope's comics storytelling has its roots in the classic superhero stories he read as a child, from his lifetime devotion to the classic stories of Asimov and Bradbury — and the epic storytelling of Star Wars.  At age 25, Pope embarked on a career creating comics for the Japanese manga publisher Kodansha, living and working in Tokyo.  His comics have since reflected the effortless pacing, breathless emotional storytelling, and widespread accessibility that the manga form is so well known for, while retaining an aesthetic that is truly Pope's own. The protégé of Moebius, the legendary grand master of the French comics industry, Pope's current work integrates all these influences into a heady concoction with a uniquely American sensibility.