This totally slipped my mind tonight, and I'm sorry to have missed it.  Apparently I appeared in a clip in a documentary about the awards too! (sigh) However, Steve Artley got a photograph of Stephanie McMillan the cartoon winner that he's allowed me to post:


I got this shot of Stephanie holding her trophy at the RFK awards ceremony at the U.S. Institute of Peace tonight. 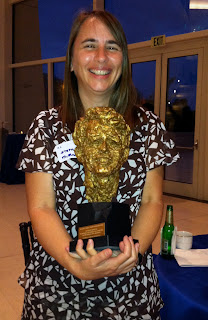 Stephanie McMillan self-syndicates the editorial cartoon "Code Green," which focuses exclusively on topics related to the environmental crisis. Her comics journalism piece about the Occupy protests, "The Beginning of the American Fall" was originally commissioned by the Cartoon Movement, and will be expanded into a book to be published this fall by Seven Stories Press. She has been active around social justice and environmental issues for most of her life.

Sorry you didn't make it -- I was actually looking for you there, wanted to meet you!

Stephanie, I'm sorry I missed you. Unfortunately, RFK didn't send out invitations or reminders to we judges this year, so it totally slipped my mind. Perhaps at next time at SPX?

Yes, great! I'm not sure I'll make it to SPX but I'll be at the AAEC that same weekend in DC.