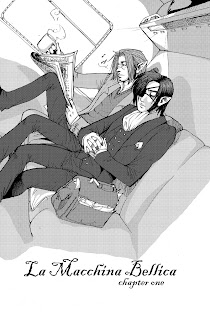 Deanna Echanique, who cartoons as Dechanique, embarrassingly enough came to my attention through this Canadian interview done for the Toronto Comic Arts Festival (TCAF) of all places. Her webcomic La Macchina Bellica is the gay-friendly story of elves versus humans in a world where magic and technology are both used in war,. Chapters 1-5 have been collected in a trade paperback and #6 is available as a comic book. She has recently started illustrating a new webcomic Kindling. She was kind enough to answer my usual questions.

Mike Rhode: What type of comic work or cartooning do you do?
Dechanique: I draw primarily long-form graphic novels. I work all steps of the process myself (thumbnailing, penciling, inking, and occasionally coloring).  While I am primarily a comic artist, I also have illustrated children’s books and enjoy oil painting, book-binding, and sculpting.
How do you do it? Traditional pen and ink, computer or a combination? 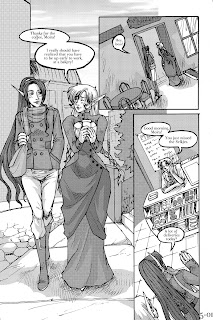 It depends on the project.  For La Macchina Bellica, I pencil the pages print-sized on printer paper, scan them, and ink/tone them digitally in Manga Studio. I transfer the image to Photoshop for text placement and coloring (for the first half of Ch 7). Kindling is done mostly traditionally.  Pages are penciled and inked on 11 x 17 Blue Line Pro comic boards.  I used watercolors and a combination of Copic and Prismacolor markers to color the pages.  The upcoming chapters will be in black and white, penciled and inked in the same method, and toned digitally in Manga Studio.
For inking, I generally use a Pentel pocket brush pen, the Tachikawa school g nib fountain pen, and Microns of varying sizes!
When (within a decade is fine) and where were you born?
April 3, 1984 in Wilmington, North Carolina. TEXTBOOK ARIES
Why are you in Washington now?  What neighborhood or area do you live in?
I moved to DC after graduating from college in July 2009. I lived in by Navy Yard for a while, but relocated to Columbia Heights October 2010.
What is your training and/or education in cartooning?
I graduated from Salisbury University with a BFA in Drawing.  I never took any specific sequential art or cartooning courses- in that aspect I am self-taught.  I did, however, take a plethora of traditional drawing and painting classes, focusing on the figure.  The best training in creating comics I got was “on the job” - drawing lots and lots and lots of comic pages. Trial, error, practice, working outside your comfort zone!
Who are your influences?
My biggest influence has been growing up exposed to anime/manga. When I first started drawing comics, I was 11 and my classmate Chloe would loan me the French editions of Sailor Moon (Naoko Takeuchi) and Ranma ½ (Rumiko Takahashi). At the same time, anime started playing in the US more widely- Sailor Moon and G-Force (Gatchaman), Speed Racer, Tekkaman Blade. I was totally hooked! My art was pretty “generic” manga in my teenage years, but in my early 20’s began changing as I started taking traditional art classes in college (I’ve become enamored with drawing lips and noses!) and exposed to a wider range of classical art. Art Nouveau (and the Victorian era dressings/ Steampunk aesthetic became coming into my work.
My painting instructor at Salisbury University, Mr. Jin Chul Kim, has also been influential in my career. He was more or less my mentor during my years there.
More recently, my exposure to social media and broader range of indie and webcomics, and manga like Blade of the Immortal (Hiroaki Samura) and One Piece(Eiichiro Oda), all of which I feel has lead to my evolution in page layout and story-telling, and in creating a broader range of characters. Particularly Eiichiro Oda. I admire him greatly for his story-telling ability and character development, and he has no doubt influenced what I do today. 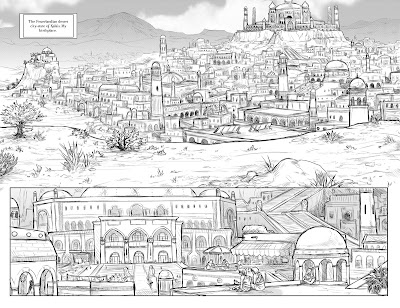 If you could, what in your career would you do-over or change?
I would say my biggest “what if” scenario is how my career would have turned out if I had put together a portfolio and applied to art schools straight out of high school. I desperately wanted to go to SVA or SCAD, but when I graduated from high school, I had a full ride at a local university, so I opted to go there because I hadn’t prepared a decent portfolio, and was daunted by the cost. I got a BA in Psychology at Florida International University.
I ended up going back to a state school for art later but due to the fact I already had a degree, I didn’t qualify for any scholarships or grants (most specify it has to be your first degree). I racked up a crapton of student loans going back to school. Going to art school straight out of high school I would have spent about the same amount, and maybe would have been in a different place (technically/skill wise) now.
With all that said, however, I wouldn’t actually change what has happened to me and my decisions given the opportunity.  I did learn a great deal from being mostly self-taught as far as sequentials are concerned, I made many friends while in college, and while I might be further along in my career had I started younger, I don’t think I would be drawing the same stories or made the professional connections I have. I think I would be a different person than I am now. 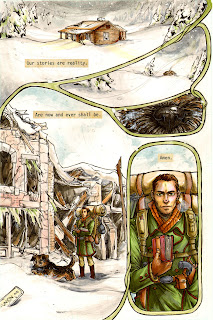 What work are you best-known for?
My webcomic, La Macchina Bellica. :3
What work are you most proud of?
The work I’m producing for Kindling. Technically, it’s the best work I’ve put out and I’m definitely very proud of it! Having a talented writer turning my creative gears and pushing my boundaries has been super helpful. I have high hopes for this series after designing the characters and thumbnailing the first book. It’s got me really excited!
What would you like to do or work on in the future?
I desperately want to learn to animate! It’s something I’ve always wanted to do, but wasn’t able to find a teacher (or figure out how to do it on my own). I dabbled with animated GIFs for a while, but I just can’t make the transitions nice enough.
What do you do when you're in a rut or have writer's block?
Whenever I get stuck, I bust out some erotica! That usually helps break my art-block, though to be honest, I don’t find I get art blocks often. More likely, I’m just burnt out from deadlines and want to play video games and be lazy for a couple hours.
What do you think will be the future of your field?
Hahah, I’m not really sure! But my outlook is positive!
What's your favorite thing about DC?
Ease of getting around without a car. DC is super walkable/bike-friendly. I rarely ever use my car (except to go out of town or to conventions).
Least favorite?
The lack of parking. It’s a never-ending battle. There aren’t enough parallel spaces, we have to move our cars constantly for street cleaning, and I get ticketed for stupid things like, a $50 ticket because my registration sticker wasn’t properly affixed to my windshield (the glue is shoddy, it was hanging by one corner). I wish I didn’t need a car.
What monument or museum do like to take visitors to?
The Smithsonian Natural History Museum! It’s my favorite. I could wander around in there all day, staring at dinosaurs and stuffed creatures. Pandas – smaller than advertised. Lions – HOLY CRAP HUGE.
How about a favorite local restaurant?
Chix, on 13th and U St NW! Their food is fantastic – and they have a $10 wine bottle happy hour that is just faboo.
Do you have a website or blog?
La Macchina Bellica –http://www.macchinacomic.com
Kindling – http://www.kindlingcomic.com
Posted by Mike Rhode at 10:05 PM