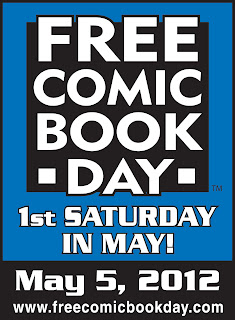 From Big Planet Comics:
Free Comic Book Day Approacheth!
Next Saturday, May 5, is the annual Free Comic Book Day! As always, all of our stores are participating, so stop by and get some free comics! It's also a great time to bring your friends or children in too! We have been receiving our free comic books over the last few weeks, and there are a LOT this year. Avengers, DC New 52, Simpsons, Mega Man, a HARDCOVER from Archaia, Serenity, Star Wars, Yo Gabba Gabba, Adventure Time, Buffy the Vampire Slayer, Spider-Man, and more! You can see the full list of free comics at freecomicbookday.com

We are also having signings at two of our stores in conjunction with Free Comic Book Day. Jeremy Whitley and Jorge Aguirre, who both write great all ages comics (Princeless and Giants Beware!) will be at our Vienna store from 11-1 and our College Park store from 3-5. They will be signing copies of their comics, and happy to talk to young fans and readers too! More information is below.

Free Comic Book Day is just a few weeks away! Bring your friends, we have a lot of great comics to give away this year! To see the complete list, go to freecomicbookday.com!

In addition, we are proud to present 2 great comic book writers, who have just published some great all-ages fantasy adventure comics! Jeremy Whitley writes Princeless, and Jorge Aguirre writes Giants Beware! They will be appearing at our Vienna and College Park stores.

This year’s Free Comic Book Day will be Saturday, May 5th.

Also meet an abundance of costumed heroes! Fun for kids of all ages!

From Game On! Comics

Come out to Game On! Comics for Free Comic Book Day! Once per year, comic shops around the country give out comics for free.

We will have a great selection of comic books for you and your friends, for FREE. LOTS of children's comics!

Over 40 titles! One Free Thor Heroclix! Widest variety of comics available in our area!

Super-Hero appearances throughout the day!! Starting around 12 noon till 3ish

Artist Appearance: 11am to 6pm

Tim will be here to sign autographs and even draw commisioned pieces just for you, for an extra cost.


Yes, it's our favorite day of the year, in fact, this is why we chose it as the day of our big grand opening celebration. FREE COMIC BOOK DAY. Every year, we work hard to bring you guys the best Free Comic Book Day on the East Coast, and this year, we've pulled out all the stops. A huge sale, loads of special guest creators, Stormtroopers!, and so much more!

Click here to get the full rundown of what we have shaking at BOTH Third Eye locations this Saturday for FCBD 2012!
Posted by Mike Rhode at 8:01 AM