Niles, Panter and the Big Planet

Microsoft and Zune have published a comic book, The Lost Ones, to advertise the Zune, an ipod like device. They got Steve Niles to write the comic and Gary Panter to draw part of it, and sent them to a few comic stores on the east coast - Midtown Comics in NYC, a store in Philly, Atomic Comics in Baltimore and Big Planet Comics in Bethesda.

Richard Thompson and I rode up together. Richard also had a portfolio of his artwork to show Joel. I peeked too and it was very cool - lots of lovely, and some unlovely, caricatures although none of Obama.

We also got to see Art Harrison performing on his homemade Theremin in the little veterans park up the block.


Both creators were quite pleasant to talk to and seemed happy enough to be doing a signing. The crowd was okay, but not as overwhelming as I thought it would be. Panter's a major art-crowd cartoonist who was in the Masters of American Comics exhibit and has appeared in the New Yorker. Niles' 30 Days of Night comic book about vampires in Alaska was made into a hit movie (that's probably too violent for me). And the comic book, a real square bound book, was free! 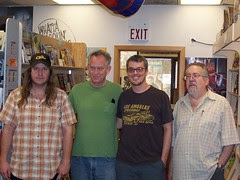 Big Planet still has copies of some of the other books they've done signed and available for sale - Batman and 30 Days from Niles, and some of the big new Picturebox artbook sets from Panter (who did a sketch in everything he signed). I got him to sign the two big Jimbo books from Fantagraphics, Purgatory and Inferno. Panter said he and his wife designed the whole books, including the endpapers. They're lovely objects in themselves. He showed me how Purgatory features a wordless version of Chaucer's Canterbury Tales introduction as a page border on the first page. Niles is originally from Reston, VA and his sister and her family came by for the event. His niece isn't allowed to watch the movie either so I'm in good company.

Richard and I hung around the whole time, and saw some other familiar faces - Randy who posts on this blog, Chris Shields of cIndy, Larry Rodman formerly of the Comics Journal and now fledgling art teacher, local book collector Rick Banning, Christian Panas who helped put SPX together for a while and now does Big Planet's website...

Here's some photos of the event, as I'm tired and babbling. 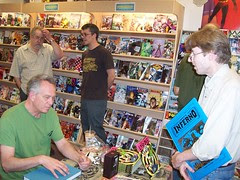 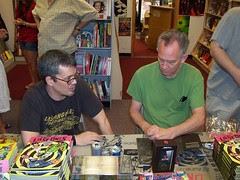 Steve Niles and Gary Panter signing The Lost Ones at Big Planet Comics. And the Zune. And a neat tablecloth decorated with the book's logo. Microsoft should publish more comic books, I'm thinking. 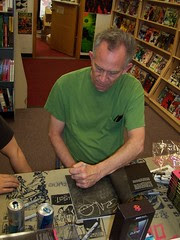 Panter showing the difficulty of being a left-handed artist in America. 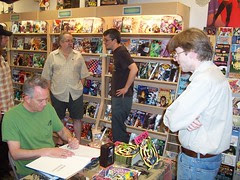 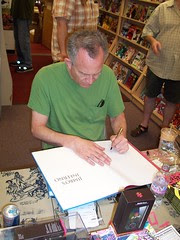 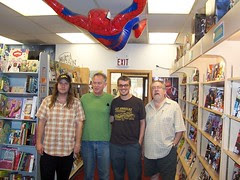 Panter did sketches in my Anything Marvel and Least Expected sketchbooks as well (and was happy to do so!). Ironically, both sketches could've been in either sketchbook!