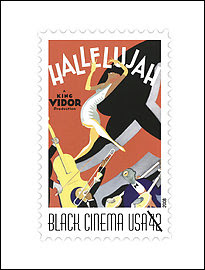 The last stamp is the work of the famed Al Hirschfeld for "Hallelujah," a 1929 film made by MGM with an all-black cast and directed by King Vidor. Nina Mae McKinney, another talented beauty who was known as "the Black Garbo," was a co-star. The film itself has been debated for years for including both the reality of rural life and stereotypes. The poster shows a stylized flapper raising her yellow-gloved arms.
Posted by Mike Rhode at 9:36 PM