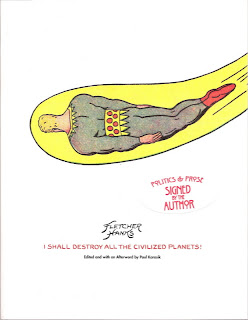 DC native and comics blogger John Daniels conducted this email interview with Paul Karasik and has made it available to ComicsDC. Thanks, John!

How did it feel to give a book signing and talk in your hometown of Washington D.C. at Politics and Prose?
I received a terrific reception at Politics and Prose. It is a wonderful bookstore and Thad, the guy who runs the graphic novel department, really knows his stuff. In other words, he likes the same things I like!

What caught your interest in writing this book about Fletcher Hanks?
I first heard of Hanks over 20 years ago when I was the Associate Editor of Art’s Spiegelman and Francoise Mouly’s RAW magazine. We reprinted a Stardust story and I never forgot it.

Four years ago a friend sent me a link to a Hanks tale on-line. I began to dig around, found some more of ‘em, and eventually came upon the answer to the true life mystery, “Whatever Happened to Fletcher Hanks?”

Where you amazed, as I was, that little was known about this ingenious artisan?
I have been amazed by several aspects of Hanks’ work. Although formulaic to a degree, each story is startlingly inventive in design and feel. Readers will not be bored by the 15 stories. In fact many people are asking for Volume 2!

Another amazing fact is that nobody has “discovered” his work until now. Many fans and collectors have asked, “How is it possible that I never heard of this guy before?!”

How would you compare his drawing style too artisans of the golden age?
Hanks is unique in that he is the first auteur in the fledgling field of the comic book. Most comic book stories at the time, and up to the present, were created by a team: individual writer, penciller, inker, and colorist. Hanks was a one-man-band, an auteur with a distinct personal vision that he burned into the pages of his work.

How much did you enjoy the meeting with his son Fletcher Hanks Jr.?
It was a life-changing experience as I describe in my comics Afterword.

In the Afterword, it seems you almost had a question as to whether his son was Fletcher Hanks himself?
At first, I thought that Hanks Jr. was Hanks Sr. It soon became apparent that I was speaking with the son who had his own story to tell. A grim story.

Do you yourself collect any comic periodicals? In addition, if so what is your most memorable character or comic that you would define as piquing your interest in the medium?
My first comic book was an issue of Adventure Comics from 1966. I was seduced by the crisp four-color pantheon of the Legion of Superheroes. You got a lot for 12 cents. It took one comic book and I was hooked. I still have all those old D.C. and Marvel comics in plastic bags in my basement, but it is nothing compared to some of the collections made available to me by a few serious collectors who contributed stories for the Hanks book from the hermetically sealed comics vaults.

You are an author of other books; could you tell the readers about some of your other works?
My most famous work was a collaboration with artist, David Mazzucchelli (Batman: Year One). Together we adapted Paul Auster’s novel, City of Glass. It was listed as one of the 100 Most Important Comics of the 20th Century by the Comics Jouranl.

I collaborated with my sister, Judy, on a family memoir, The Ride Together. The ground-breaking comics/prose format tells the story of growing up with our oldest brother who is autistic.

My gag cartoons have appeared in The New Yorker and Nickelodeon magazines.

How did you feel with the response of the sales of this remarkable book?
I am floored by the reception of this book. It completely sold out within a month and we are now awaiting the second edition to arrive from Malaysia. It is a good thing that Fantagraphics put a few cartons away for my book tour. Even then, at San Diego Comic Con, we sold out by the morning of the second day. I have nine reviews at Amazon, all five star raves. After years of toiling away at this project in the studio it is really gratifying to have such a positive response.

What is your favorite story from the book?
My sentimental favorite is also really one of the strongest: the Stardust story from Fantastic #7 that we reprinted in RAW. It is a plot by Gyp Clip to remove all the gravity from Earth, thus sending all the humans spaceward and leaving the planet free for plunder. Gyp and his thugs chain themselves with huge iron chains to prevent themselves from floating away.

What is it that you would like readers too walk away with your writing and presentation of this remarkable book about Fletcher Hanks?
Things are not always as they seem. Our heroes can become villains, and regular everyday Joes can become heroes.

Are you currently working on other works that readers and fans would like to know about?
My next project is to set out to educate the world that everything that you need to know about making comics can be learned from three panels of a certain Nancy comic strip by the great Ernie Buchmiller.

I want to thank you for taking time out of your busy schedule to answer questions at ComicsDC.

I also would like to thank the staff at Politics and Prose for reserving me a signed copy of the book.
Posted by Mike Rhode at 1:34 PM