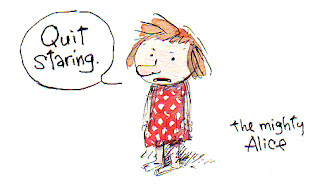 COMING SOON: One strip we're excited about is Richard Thompson's "Cul de Sac," which debuts from Universal Press Syndicate on September 10. The strip is a daily version of the comics work he's done at the Washington Post for the past few years. We asked Thompson to share some behind-the-scenes goodies from the strip, and you can see them at http://www.cagle.com/hogan/newsletter_extras/culdesac_extras/culdesac_extras.asp
We'll also have an interview with Thompson in Hogan's Alley #16.

This isn't an obligatory mention, btw. I like Cul de Sac a lot - there's a lot of museum jokes in there.
Posted by Mike Rhode at 8:32 PM