Mark just sent me the following press release and pictures - 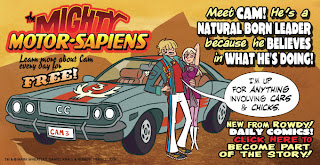 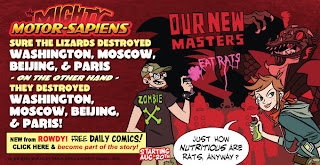 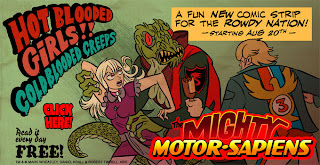 Now the Morisoni control the world and their military bases are everywhere. The Lizards live among us, but this new arrangement seems to be working. Four teenagers, Cam Corman, Hannah Barbario, Gigs Brewster and Maddie Brewster, haven't seen much of an impact from the changes. Yet. 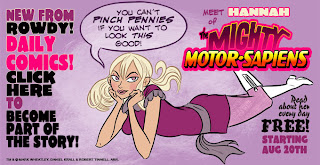 Springing from the minds of writer-artist Daniel Krall (Oni's One Plus One), writer-artist Mark Wheatley (Frankenstein Mobster), and writer Robert Tinnell (Feast of the Seven Fishes), The Mighty Motor Sapiens was created as an exclusive feature for the ROWDY.com web community. The strip will be written and drawn by Krall with additional material by Wheatley and Tinnell. All three creators are veterans of both print and online comics. They are joined by inker Craig Taillerfer (The Chelation Kid), with colors provided by Krall's studio and lettering by Matthew Plog. The strip is produced by Insight Studios. 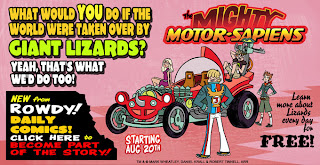 About Rowdy.com
At the forefront of the new media revolution, Rowdy combines podcasting with social networking and the internet to create a unique new place for NASCAR fans to congregate. The Rowdy podcast is a daily racing radio show devoted strictly to NASCAR racing. For 30 minutes a day, 6 days a week, fans listen in on their MP3 players, computers, or cell phones as hosts Reginald "Buck" Fever and Leonard "Bass" Masters deliver the latest news on America's most popular motorsport. Joining Buck and Bass to deliver expert commentary and analysis are award winning broadcaster Mark Garrow, former Cup driver Rick Mast, championship-winning crew chief Barry Dodson, and veteran print reporters David Poole of the Charlotte Observer, and Steve Waid of NASCAR Scene. 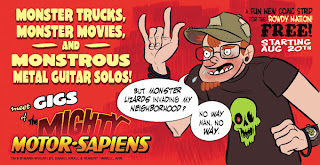 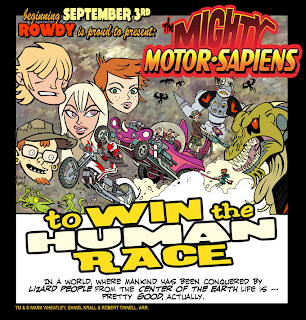 - he also sent me the theme song, but I have no idea how to link it here.
Posted by Mike Rhode at 9:23 PM