Post censors comics again (so what else is new?) 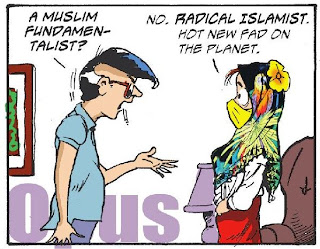 Tom Spurgeon picked up the story that Berkeley Breathed's Opus was being censored by the Washington Post, as the cartoonist reported himself on his website. Breathed suggests going over to Salon (owned by the Post, iirc) and reading the strip on the next two Sundays. Somebody remind me, please.

Here's what Breathed posted (including that picture up there):

Note to Opus readers: The Opus strips for August 26 and September 2 have been withheld from publication by a large number of client newspapers across the country, including Opus' host paper The Washington Post. The strips may be viewed in a large format on their respective dates at Salon.com.

Longtime (hah!) readers may recall my earlier post on the Post's frequent censoring (and not mentioning it) of comic strips. If the Post wasn't one of the best papers in America, this probably wouldn't matter as much...

...although I'm not sure about that.

Yeah, they're way way too sensitive.