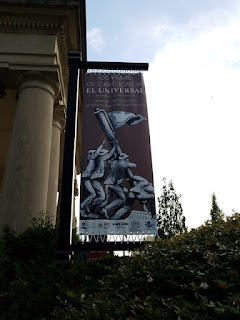 El Universal was Mexico’s first modern newspaper, according to the exhibit, and on its first day of publication in October 1916, the first thing readers would see was group caricature of the men writing the new Mexican constitution. The exhibit commemorates both the 50th anniversary of editor Juan Francisco Ealy Ortiz, and the 100th anniversary of the newspaper.

Sánchez González organized the bilingual exhibit into five sections. The first deals with the establishment of the newspaper with its early cartoonists Andrés Audiffred and Hugo Thilgmann, as well as comic strips influenced by American strips. Two original strips by Audiffred and two caricatures by Thilgmann are highlights of this section, which also includes two sheets of the original comics section of the paper, as well as reproductions of front pages with cartoons. This section is supplemented with a video of the curator discussing the exhibit. 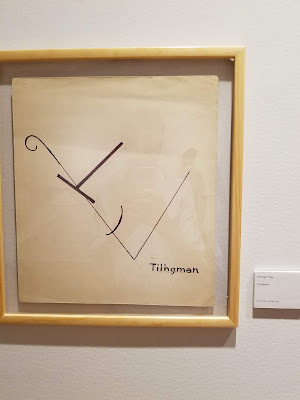 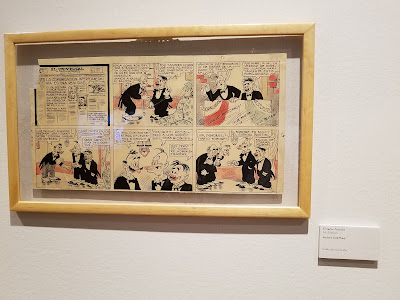 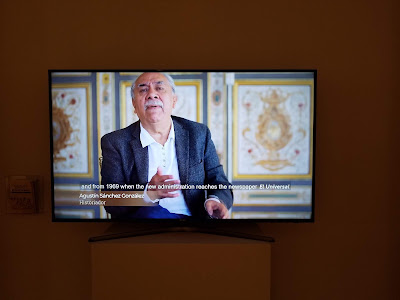 The second section is on the influence of the American cartoon and comic strip. A reproduction of a newspaper page by Guillermo “Cas” Castillo of comic strip characters such as the Katzenjammer Kids and Mutt and Jeff with caricatures of Charlie Chaplin is displayed with large reproduction drawings by Juan Terrazas of Cas’ drawings of the characters. Terrazas is the director of the Museum of Caricature which was a major contributor of pieces to the exhibit. This room is by far the weakest part of the show. In spite of the curator’s comments about fame of the characters during the exhibit opening, the comic strips are too far removed from the current audience’s experience to be recognizable. Only students of the form recognize the 100-year old characters today. A local connection to the exhibit venue is seen in Rogelio Naranjo’s self-caricature of as a young dandy holding the Washington Post with a headline announcing his arrival in D.C., but the placement of the piece in this section is odd, and probably just is an artifact of the layout of the rooms. 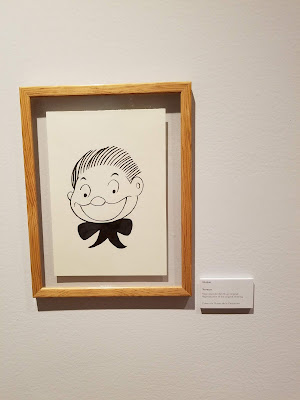 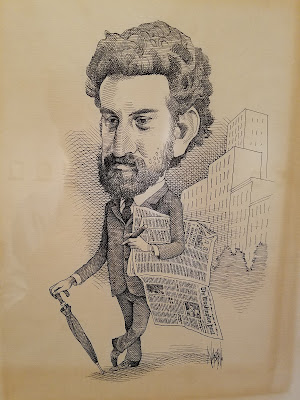 The third part concentrates on caricature of American presidents, and the fourth on Uncle Sam and U.S. politics. These and the next section are by far the strongest part of the exhibit with original artwork by masters such as Antonio Arias Bernal, Ruis, Naranjo and Helioflores featured. It can be interesting and instructive to look at caricatures by artists who are not natives of the country, because they tend not to use the same tropes or exaggerated features as a local cartoonist might. Bernal’s drawing of Eisenhower is clearly recognizable, but Ruis’ cartoon of John F. Kennedy makes him look more like Superman’s Jimmy Olsen, and Efren’s caricature of Reagan does not seem accurate at all. Audiffred is still working for the newspaper at this time, and has a nice heavy ink line displayed in his drawing of Vice President Richard Nixon. Naranjo’s drawing of Jimmy Carter is firmly in the large-headed David Levine-influenced style, but with two men hanging on barbed wire behind Carter, is probably harsher than what would have appeared in an American publication. One of the pieces that resonates today is Helioflores drawing of Richard Nixon as a tree with multiple cuts in its trunk and titled, “¿Caerá? (Will it Fall?).” Although there are two good caricatures of Trump in this section, the Nixon drawing feels timely. 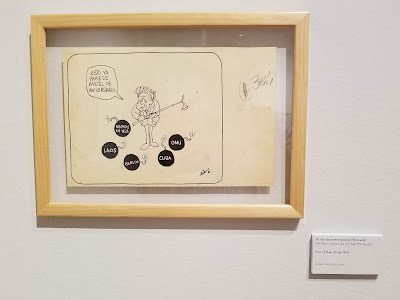 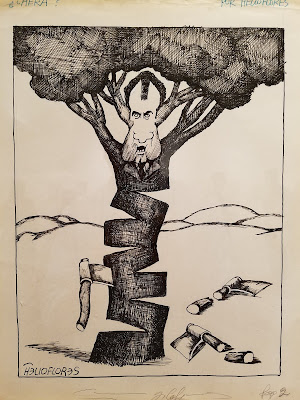 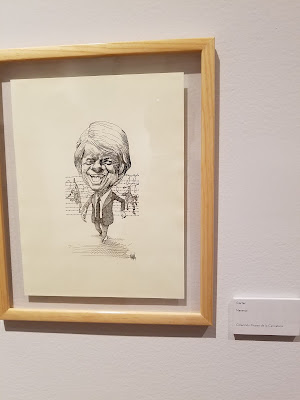 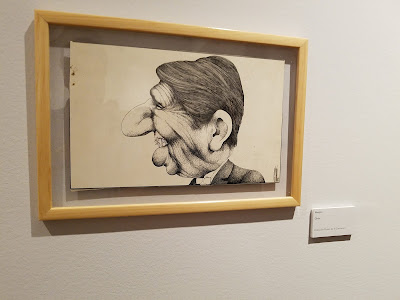 The section on Uncle Sam’s best piece is “Cáscaras (Banana Peel Fall)” by Bernal, showing Uncle Sam slipping on a United Fruit Company banana peel. This section however, reveals the problem of the lack of dates in the captions as the viewer will not necessarily be aware of the events that prompted the cartoon. An exception of course is Altamrino’s odd untitled drawing of Uncle Sam missing two front teeth after September 11, 2001. Kemchs’ “Alambrada (Barbed Wire), a color print of Trump’s name as barbed wire is a clever piece even if it does not feature Uncle Sam. 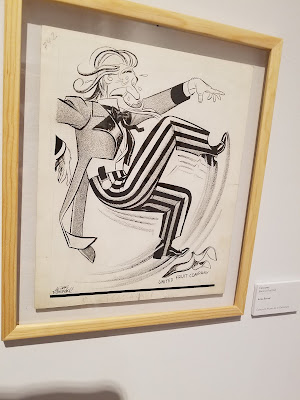 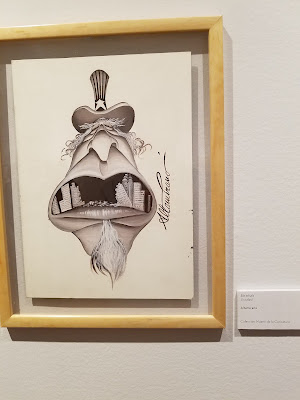 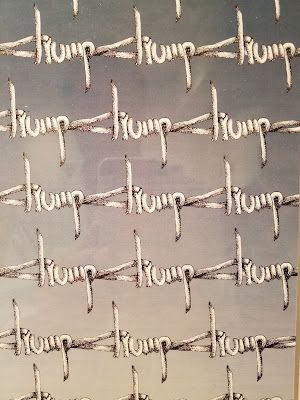 The exhibit closes with a section on masters of Mexican cartooning. Without needing to hew closely to a theme, this section is the strongest part of the exhibit. Excellent examples by all the previously named cartoonists are featured along with others by Omar, PIT, Carilla, and Dzib. 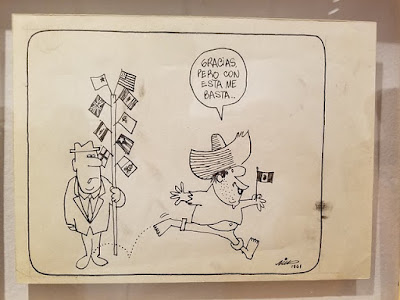 Overall the exhibit is an interesting and educational introduction to one particular niche in Mexican cartooning. Additional photographs can be seen at https://flic.kr/s/aHsmGJtK1B. The exhibition is open Monday – Saturday on 16th St NW, and includes a free booklet. The historic mansion that holds the exhibit is available for a guided tour as well, and features striking murals by Roberto Cueva del Río of Mexican history up the three levels of the main staircase. I believe there is an accompanying book and will provide additional details if I can confirm that.

(This review was written for the International Journal of Comic Art 21:2, but this version appears on both the IJOCA and ComicsDC websites on September 6, 2019, while the exhibit is still open for viewing.)
Posted by Mike Rhode at 12:01 PM