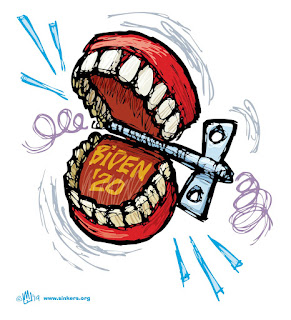 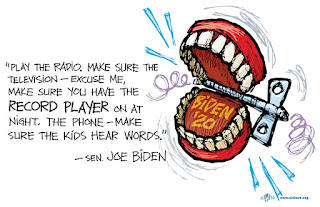 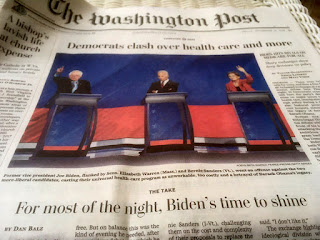 A couple of days late due to SPX, but it's still anarchist cartoonist Mike Flugennock's latest'n'greatest:
"The Teeth Of Biden (Make Sure The Kids Hear Words)"
http://sinkers.org/stage/?p=2801

(the amazing sequel to "The Eye Of Biden")

The Biden Train kept a-rollin', all night long. As DNC frontrunner
(cough) Sen. Joe Biden was defending the rank-ass "legacy" of his
ex-boss and forgetting what he was saying halfway through his answers
on the "debate" stage this week, the featured body part malfunction
was the Senator's dentures, which slipped out on the air at the worst
possible moment — which is to say, pretty much every moment, from all
accounts.

Not to be denied, however, the Washington Post splattered their front
page with this big ol' slab of gaslighting, Emperor's New Clothes
raving and drooling by columnist Dan Balz — Balz being, I assume, what
you'd have to have a whole lot of to cough up this thing onto the
front of a major daily paper with your name on it.

"Biden's time to shine..."?
HIS GODDAMN TEETH FELL OUT ON LIVE TV, F'CRISSAKE.
Dear god, somebody tie me to a railroad track.

...y'know, you can say what you want about George Washington — that he
was a slaveowner, a colonizer, all true — but you have the give the
Father Of Our Country credit for at least one thing: he would never,
EVER have allowed his teeth to fall out on TV.