Bruce Guthrie on Batman @ Society of Illustrators Museum in NYC

by Bruce Guthrie
Ace local photographer Bruce Guthrie visited the exhibit and wrote some notes to go alone with his pictures:

I visited the Society of Illustrators Museum in NYC on Tuesday.  The entire museum was devoted to four (!) Batman exhibits.
Batman has always been my favorite comic character, probably helped by the fact that his real name is Bruce Wayne.  (Ages ago, I was going some contracting work for NIH while I was working for the Department of Commerce.  NIH said I couldn't sign up as a Commerce person so they said I needed another company.  Bruce... Batman...  So Wayne Software did the programming work for them.  My business card had "Batman Lives" in hexadecimal characters under the company name which probably drove the proof readers at the card company crazy.)
The four exhibits, which run through October 12, a week after the New York Comic-Con event, are fully described on https://www.societyillustrators.org/exhibits .
* (Third Floor) Batman Collected: Chip Kidd's Batman Obsession
* (Second Floor) Bat-Manga!: The Secret History of Batman in Japan
* (Second Floor) Batman Black and White: Sketch Covers Selected by Chip Kidd
* (First Floor and Basement) Illustrating Batman: Eighty Years of Comics and Pop Culture
The Eighty Years One is the biggest.  It includes original pages going back to the 1940s and some commissions by Alex Ross, Neal Adams, Bob Kane, Joe Giella (much of the collection was from Joe's son Frank), Dick Sprang, Jerry Robinson, Sheldon Moldoff, Carmen Infantino, Irv Novick, Brian Bolland, Kelley Jones, Jim Aparo (including the famous back-cracking sequence from Bane), Sam Kieth, Mike Mignola, Ross Andru, Gene Colan, and others.  I recognized way too many of those pages!  There were also originals of the daily comic strips.
The manga exhibit had about 50 original pages from a Manga Batman story by Jiro Kuwata.
Chip Kidd's Batman Obsession section had lots of originals and commissions by various folks.  The pieces by Frank Quitely were gorgeous.
My favorite, however, was Chip's Black and White exhibit.  He had 100 illustrators create original cover art for him.  Two dozen of the original illustrations are on exhibit.  Some of the artists -- Frank Miller, Mike Mignola, Jim Lee, Steve Rude, Michael Golden, Kyle Baker, etc -- you expect to see.  But he also approached folks like Xaime Hernandez, Roz Chast, and Liniers.
One of the things I loved was that the entire museum has flying bats in various corners.  Similar to how the Ralph Steadman exhibit at American University's Katzen had splatters periodically.  Steadman, BTW, came to SOI so there is a Steadman splatter on the wall.  The cleaning crew thought it was a spill and started to clean it up before panicked people stopped them.
Of course I did my normal photo obsessive thing so you'll find all of the exhibits on my site --
http://www.bguthriephotos.com/graphlib.nsf/keys/2019_08_27E2_SOI_Batman_Pop
http://www.bguthriephotos.com/graphlib.nsf/keys/2019_08_27E3_SOI_Bat_Manga
http://www.bguthriephotos.com/graphlib.nsf/keys/2019_08_27E4_SOI_Batman_BW
http://www.bguthriephotos.com/graphlib.nsf/keys/2019_08_27E5_SOI_Batman_Coll 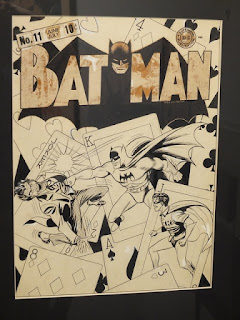 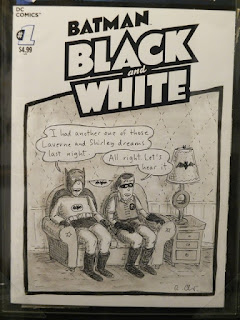