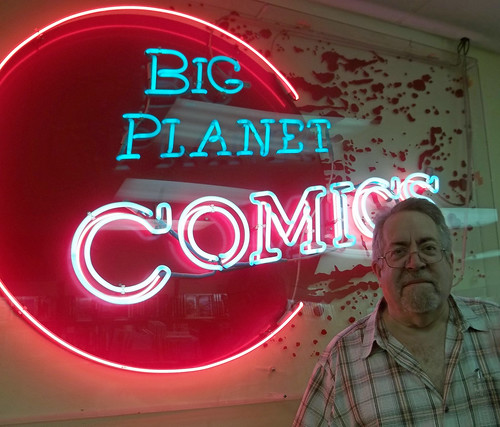 Thirty years ago today, Joel Pollack opened Big Planet Comics in Bethesda, Maryland. I became a regular customer soon afterwards. I'm glad to count Joel as a friend and to be able to run this 'thank you and congratulations' interview with him all these years later.

MR: When and where did the first BP store open?

JP: My first business partner, Gene Carpenter, and I opened the Bethesda Big Planet Comics on July 11, 1986. Our first location was on the second floor of 4865 Cordell Avenue, just 100 feet from our current location (at 4849). After one year, I decided that Gene's focus on back issues/collectibles was incompatible with my vision of what a modern comic shop should be, and I bought him out. It was an amiable split, and Gene and I remain friends.

MR: Why did you decide to open the store?

JP: I had worked in my father's drapery business since the age of twelve, and when he retired I found myself unemployed. I had toyed with the idea of opening a comic shop for at least ten years before I made my move.

MR: You'd been active in fandom and publishing before that. Can you tell me about some of your work, like selling Bernie Wrightson's original art?

JP: I became a part of "organized" comics fandom as early as 1963 when I discovered my first fanzine, "Rocket's Blast". I was a charter member of Biljo White's "Batmania." In 1965, I had my first letters published in Detective Comics #342 and 343. That same year, My aunt Kitty Goldberg introduced me to her friend, Ira Schnapp, who was a letterer and designer at DC Comics. Ira invited me to visit DC's offices (twice) and I met Curt Swan and Murphy Anderson. It was those visits that made me determined to work in the comics field.

I attended my first convention (the first major comic convention) in 1968. Phil Seuling ran that convention and many subsequent July 4th conventions. At those conventions, I met many of my artistic heroes, as well as several up-and-comers who were my age. I became friends with several, including Bernie Wrightson, Jeff Jones, Michael Kaluta, Howard Chaykin, and Walt Simonson. I dabbled in publishing, first with Bob Lewis on "Colour Your Dreams," a fantasy coloring book, and later, the ill-fated "Wet Dreams" portfolio.

In the early 1980s, I started reselling original art and published four "Fantastique Illustration Catalogs," selling art by Wrightson, KaIuta and Jones, as well as by younger artists like Charles Vess and Jon J. Muth. I sold at least a dozen of Bernie Wrightson's original Frankenstein illos, none higher than $2000. Those same pieces now fetch tens of thousands. A lot of great art has passed through my hands.


MR: How did the decisions to eventually expand to four stores happen?

JP: It started when my protege, Greg Bennett, graduated college, and we opened the Vienna store together in 1992 (still in its original location). I mostly acted in an advisory role, while Greg did all of the hard work. In 2001, when it looked like an existing Georgetown comic shop was going to fold, Greg and I decided the time was right to make our foray into DC (I was born in DC). After years in our charming old rowhouse location in Georgetown, the building was sold, and we decided to move the shop to U Street for better Metro access and a younger population demographic.

Our long-time store managers Jared Smith and Peter Casazza bought Liberty Books & Comics in College Park and turned it into the fourth Big Planet location, and now own the Vienna and U Street shops as well, allowing Greg to focus on Bethesda as I have been approaching retirement age. College Park is the only one I had no hand in, other than giving moral support, and licensing them the Big Planet Comics name.

MR: How have you survived the ups and downs of the comic book market?

JP: By mostly ignoring the collector in favor of the reader. Early on, we saw the future of contemporary comics in the collected editions, the so-called graphic novels/trade paperbacks. We eliminated 90% of our back issue stock, and gave over 75% of our rack space to collected editions. To this day, Big Planet Comics has the most comprehensive selection of comics in book form of any store in the area. The only back issues we carry in Bethesda are some vintage comics from the silver age.

MR: How has the store changed over the 30 years? How is it the same?

JP: The main change is what I described above: a focus on collected editions and graphic novels. Our market has evolved from a primarily male collector-driven business to a much more diverse reader-driven base - especially with the tremendous growth in graphic novels for kids and young adults in the last decade.

What has stayed the same is our focus on customer service. We constantly upgrade our inventory, and we're happy to fill special orders.

JP: For me, it's retirement. Even after retirement, I hope to continue in an advisory role, and spend a few hours weekly in the Bethesda store. I've made a lot of good friends there through the years, and I consider Big Planet Comics the high point of my life.

(Click here for more of my photographs at various Big Planet Comics stores and events)
Posted by Mike Rhode at 10:19 AM