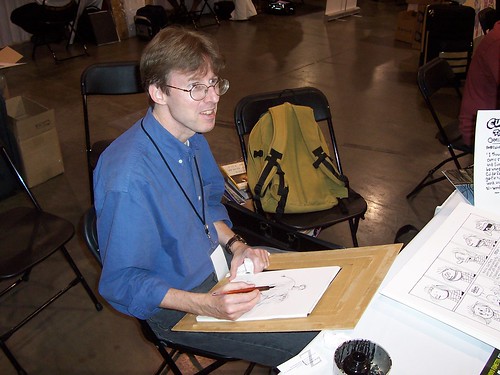 Richard Thompson collected friends. And admirers who became friends. I first met Richard ten years ago in November 2006. Although it seems longer ago than that, probably because I'd seen his work in the Washington Post, practically every day, for the previous two decades. Joel Pollack introduced us at the opening of the Cartoon America exhibit at the Library of Congress.  We hit it off, Richard's quiet, sly wit keeping me grinning, and soon we began taking in more exhibitions with other of Richard's old friends (who are also talented artists) such as Bono Mitchell, Nick Galifianakis and Kevin Rechin. Soon I was popping over to his house in North Arlington, where Amy, or their daughters Emma and Charlotte would answer the door and yell down to the basement studio, "Dad, Mike's here again," because of course, he was never on time for whatever event we were going to. Richard and his gang kindly enfolded me into their lives, and I can never pay him or them or his family back for that kindness. An inexact analogy would have Richard as the sun in a solar system, with family and friends orbiting around him and then around each other as a result. I met many good people, some famous and some not, through being privileged enough to hang out with Richard (and having a drivers license that I was willing to use).


Richard was an engaging traveling companion, even if he could be a bit... frustrating. At one Con, he was panicking because he couldn't find the $400 he made earlier in the day. (This is when he was selling his daily Cul de Sac strips for $100 or less). We tore apart our hotel room, over and over, obsessively rechecking his luggage and clothes. Eventually it turned up where he'd 'safely' stored it - in his pillowcase. Certainly, no maid of a criminal bent would ever have checked there. That wasn't atypical behavior for him, because in many ways, Richard was a typical artist, forgetting to eat, or leaving jobs until the last minute so inspiration would strike. One of my great regrets is that he never took Francoise Mouly up on her offer to do a New Yorker magazine cover. I actually saw her pleading with him to submit one.


As I noted for Andrew Farago of The Comics Journal, in spite of the appearance of being an overnight sensation with Cul de Sac, Richard had paid his dues. He worked regularly doing illustrations for the Washington Post from the early 1980s, eventually appearing almost every day of the week. He also did two comics for them - Saturday's Richard's Poor Almanac panel and Sunday's Cul de Sac in the Magazine. Beginning in 1991, he did interior illustrations for the New Yorker. He did over 400 caricatures for US News and World Report over the course of nine years. In short, Richard was a successful working illustrator long before most people outside of a small world of editors and other illustrators ever paid attention. When Cul de Sac went into the world beyond the Washington Post in 2007, a new audience began gravitating to him, but the devastation of a rapid case of Parkinson's disease meant that all of us, old and new readers, only got another four years of Richard's imagination to enjoy. I think he could have easily run for another twenty years with Cul de Sac, doing quality work. He's written on his blog about how he enjoyed introducing new characters, and Mr. Danders was just waiting to be returned to the strip.
I began writing this just a few hours after learning of Richard's death, although those of us who were lucky enough to live close to him knew it was coming. Richard's art and his family had meant everything to him (with food colored orange coming in third, oddly enough). He lost his ability to make art years ago. He broke his hip while compiling the Complete Cul de Sac and then couldn't get out and do things and see people. They came to him, but it wasn't the same as him being able to pop down to the Washington Post when he wanted to get out of the house, as he did for much of his career. The past year, he took a rapid slide downhill, and several weeks ago, friends from out of town began arriving for what we all knew was a goodbye visit, even if nobody referred to it that way.


Even though Richard's body betrayed him in the end, his talent and his mind and his way of looking at the world gave enjoyment to many people for three decades, which is more than many of us can ever claim. Richard lives on in his art and books, so my friend has an immortality of sorts (that I know was a comfort to him), and I hope the new books Richard's friends are working on will give people a small glimpse into what I enjoyed over the past ten years of our friendship. - Mike Rhode
Posted by Mike Rhode at 2:16 PM

Very nice, Mike. Thanks for taking the time to write this.
Matt