AFL-CIO News cartoons at the University of Maryland

I spent most of Wednesday at the Hornbake Library at the University of Maryland photographing the cartoons from the AFL-CIO News publication.  I made it through 9 out of 16+ boxes.  Frankly, my favorite cartoon was the one they showed us during the DC Labor Fest tour last month -- the piece celebrating the merger of the AFI and CIO in the very first issue.

Le Baron Coakley's (Coak's) works -- the earliest ones -- were my favorites.  Well drawn with wonderful detail.  The lion's share of the cartoons were by John Stampone (Stam) who, while I realize he was huge in the AAEC, I thought him less talented and pretty repetitive.  A few cartoons were by Bernard Seaman who had a style that reminded me of Herblock.  (When Coak drew legislation walking around as a person, I thought "Legislation!"  When Stam did so, I thought "Towlie!" from Southpath.  None of Coak and Seaman's work showed any white-out whereas a number of Stam's did.  But there were a lot fewer pieces by Coak and Seaman so maybe my sample is skewed.)

There were at lot of cartoons missing so you don't get a complete picture.   I went through what should have been 20 years of weekly cartoons (1955-1975) and there were only 630 or so there.  Most of the ones from the 1950s -- Coak's time -- is gone.  The 1960s was better but still not complete.  I would have loved to have seen the cartoon they did after JFK was assassinated on 11/22/1963 -- there was one prepared in advance for the 11/23/1963 publication and there was one for 12/7 but I really wanted to see the one for 11/30.  There were gaps around the moon landings (except for one from Apollo 17) which I'm sure would have been worked into the cartoons some how.  The library should have copies of all of the printed AFL-CIO News publications so I can see them in that form.

The humor in general was disappointing.  Most of what I found funny was seeing how things were portrayed back then.

It was fascinating to see how non-white males were treated over the years.  Women were always shown as housewives only until the mid-1960s -- that didn't change as much as I'd hoped by 1975.  Blacks were initially virtually invisible but as the AFL-CIO got involved with Martin Luther King Jr and other campaigns, African-Americans started to show up more often, albeit early on mostly in character roles that were stereotypically black (poor folks, civil rights folks, unemployed folks...).

There were several cartoons in the mid-1960s supporting the war in Vietnam.  There were a number of cartoons about Nixon's wage and price controls -- something I'd totally forgotten about.

Also seen was one of the worst caricatures of Johnson/Humphrey I've ever seen.

I'll go back at some point to see the rest of the collection.  If anyone wants to visit them, they're open to the public. 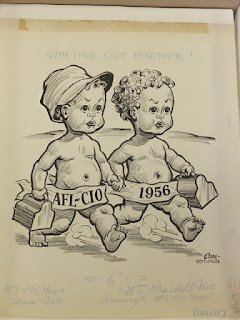 Stam -- the worst caricature of Johnson/Humphrey. 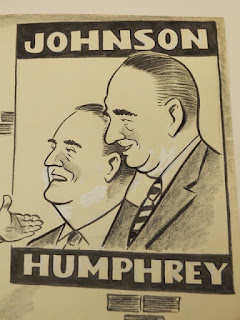 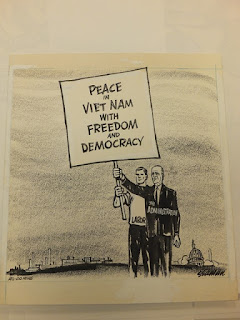 Stam -- (The text in the cloud says "Defense of Freedom in Vietnam"). 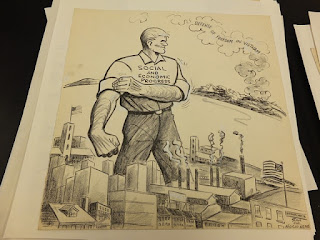 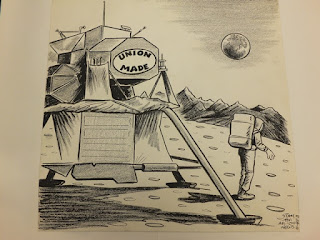 Stam -- Tweedledee and Tweedledum with Alice 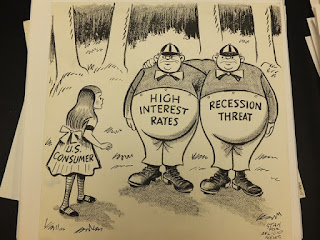