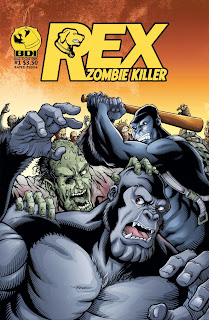 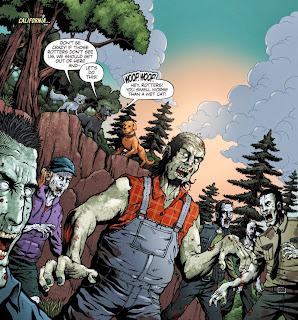 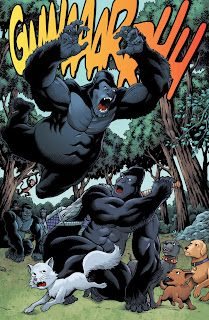 Rob Anderson notes, "My comic book "Rex, Zombie Killer" is returning
as a new 4-issue miniseries from Big Dog Ink. It's in the current
Previews and #1 will be shipping in October.

P.S. my first issue writing "My Little Pony" for IDW will be in *next*
month's Previews, shipping in November... "

DOGS VS. APES VS. ZOMBIES IN THE NEW "REX, ZOMBIE KILLER" MINISERIES
The Gorilla with a Baseball Bat Returns!

This Halloween, three dogs, a cat, and a gorilla with a baseball bat
continue their battle against the walking dead in the new four-issue
miniseries REX, ZOMBIE KILLER from publisher Big Dog Ink.

And if the zombies weren't bad enough, they're now also being pursued
by an aggressive group of primates from a zoo!

"It's going to be dogs versus apes versus zombies in the first
issue...and then things are going to get REALLY crazy from there,"
said writer Rob Anderson.

REX, ZOMBIE KILLER tells the story of a hyper-intelligent Golden
Retriever named Rex, a sign language-speaking gorilla, and a small
pack of animals making a perilous cross-country journey to find
safety...and a home.

Rex is trying to reach the doctor who raised him, but the doctor's
been relocated to an underground military bunker in Nevada," Anderson
said. "So even if they make it across a zombie-infested California,
there's not necessarily a cozy fireplace waiting for them."

Issue #1 picks up right from the end of the one-shot from 2012, and
will make a great jumping-on point for new readers.

"We're extremely pleased to have REX, ZOMBIE KILLER back on the
stands," said Big Dog Ink Publisher Tom Hutchinson. "The double-sized
one-shot received acclaim from both horror and comics outlets, and
fans have been asking for more, so here it comes!"

Issue #1 of the bi-monthly four-issue miniseries ships on October 30,
2013, just in time for Halloween! Each issue will be a full-color,
28-page, standard trim comic book, priced at $3.50, and may be
pre-ordered at your local comic shop. (Diamond Previews Order Code:
AUG131097) It is rated TEEN+ (13 & up) for mature themes and zombie
violence.

About Big Dog Ink
Founded in 2009, Big Dog Ink (http://www.BigDogInk.com) is the
publisher of comic book properties such as the acclaimed monthly
ongoing series, THE LEGEND OF OZ: THE WICKED WEST, along with diverse
titles like PENNY FOR YOUR SOUL, CRITTER, URSA MINOR, and the all-ages
title SERUSIS.