Doug Tennapels' newly-expanded and colored graphic novel Tommysaurus Rex (Scholastic) is, as you might expect from the title, an odd animal. First published in 2004, this story of a boy and his dinosaur is aimed at children, but is really all-ages.

Ely's dog Tommy (and best friend of course) is killed by page 10 setting a rather dour tone for a book's beginning. His parents dispatch Ely to his grandfather's farm for the summer in hopes that he'll get over the death. When he arrives, his grandfather has a toy Tyrannosaurus Rex as well as a lot of farm chores for him. At the end of his first day, Ely is confronted by Randy, a local bully, who chases him into a cave and smears 'dog poop' on him. That night his grandfather hears about it, and while the two are talking about the morality of trying to make someone at poop, Grandpa's leg cramps. "It's just my trick ankle. It fires up everytime something good is about to happen. That or it's gout." 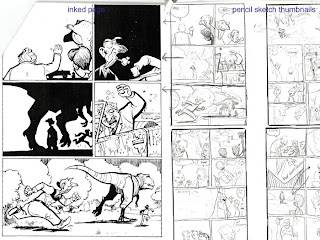 Guess which it is? That night, Ely hears a roaring through his open window and follows the sound back to the cave. Tennapel's tale takes a hard turn towards fantasy by having a small tyrannosaur hatching in the cave. It imprints on Ely, and the next morning Grandpa becomes the first person to ever say, "A dinosaur is eating my cow." Damage around town soon follows, but Grandpa and Ely convince the mayor that they can train the dinosaur and it will become a tourist attraction. As he trains it, Ely eventually comes to believe the dinosaur is Tommy reincarnated. The story meanders along through the dinosaur's training, a guest appearance by animator Ray Harryhausen, a kitty rescue, and further trouble with Randy until it reaches an unlikely, but emotional climax.

(an uncorrected proof was provided by the publisher for this review)
Posted by Mike Rhode at 5:33 PM