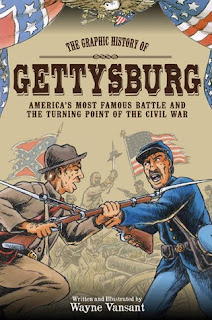 The Battle of Gettysburg, a turning point in the Civil War, took place 150 years ago today. Gettysburg: The Graphic History by Wayne Vansant (Zenith Press, 2013, $20) is a graphic history of the story of the battle. Robert E. Lee of the Confederate Army had led his troops north to Pennsylvania, hoping to both shock the North and reprovision his armies with food and clothing captured from Union states. The Union, or Federal troops, under the newly appointed Major General George Meade, intercepted them near the small town of Gettysburg in southern Pennsylvania. Although Lee did not want to fight a pitched engagement, his cavalry scouts under JEB Stuart had wandered south towards Washington and didn't warn him away from the Union (or Federal) troops. Once some of his troops were committed, Lee decided to fight, hoping to punch a whole in the Union line of defenders. For three days, the two sides fought with thousands of men until the Union broke a last chance charge by General George Pickett. On July 4th, the Confederates retreated, and Meade didn't follow them in spite of President Lincoln's urgings.

The story is so big and complex that it doesn't fit well into 96 pages. Vansant does a competent job of explaining the preparations before the battle, the three days of the battle and the aftermath, including the full text of Lincoln's Gettysburg Address which dedicated the Union cemetery. He's obviously used reference photographs, and his artwork makes the famous people recognizable, if a bit stiff. He approaches the story chronologically, and one can get an idea of how the battle unfolded, but the book remains rather dry. Given his young adult audience, Vansant draws a minimum of bloodshed. When he writes, "Down below, General Hood's left arm was shattered by a shell burst," he draws Hood and his horse blinded and pushed to one side by the explosion and only colors them with a golden wash. I do not think most readers would actually want any more graphic detail than that, but Vansant's decision does sap some of the essence out of the story. His need to jump from one small segment of the battle to the next, unavoidable as it may be, has the same effect.

The story appears to be factually correct, although some items such as drawing Confederate General Lewis Armistead advancing with his hat speared on his sword aren't explained. Perhaps he thought sharpshooters would aim for his hat? A final round of proof-reading would have avoided mistakes such as "Choked with emotion because he did not want to make this attack, Longstreet nearly nodded." (p. 81) Presumably 'merely' is meant, not 'nearly' since a near nod is not much of a military command.

In conclusion, this book is most likely to appeal to a boy who already has an interest in the Civil War or military history, and is a perfectly reasonable starting place for someone looking at the vast amount of Gettysburg literature.