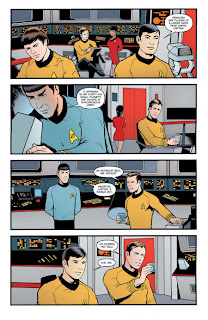 Arlington's Steve Conley is drawing Star Trek for IDW's Star Trek Year Four. They're up to six issues so far - Steve seems to be drawing about every other one and is doing some covers as well. The comic is based on the animated tv series, and has been good so far. Steve's name may be familiar from organizing the Small Press Expo, or his fun web comic / comic book Astounding Space Thrills.
Posted by Mike Rhode at 7:45 PM

Steve is a great artist and a great guy. Not sure if you knew this, but Steve also does an online comic with a DC focus - Socks and Barney.

It's some great stuff.