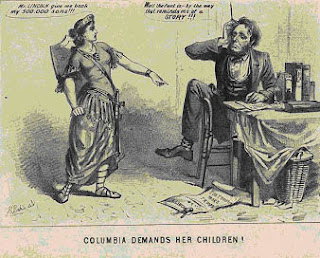 The quick details, and then the longer press release.

FREE AND OPEN TO THE PUBLIC
Where Have You Gone, Miss Columbia? American Identity and Uncle Sam’s Forgotten Partner: An Illustrated Lecture by Dr. Ellen Berg

Co-sponsored by the Swann Foundation for Caricature and Cartoon and the Prints and Photographs Division, the Library of Congress

and the press release:

Swann Foundation Fellow Ellen Berg will discuss depictions of Miss Columbia, her rise in the nineteenth century as a national icon of American ideals and subsequent fading away in the public eye, in a lecture at the Library of Congress on March 5.

Berg will present the lecture titled "Where Have You Gone, Miss Columbia? American Identity and Uncle Sam’s Forgotten Partner,” at noon on Wednesday, March 5, 2008, in Dining Room A on the sixth floor of the James Madison Building, 101 Independence Ave. S.E., Washington, DC.

Berg’s illustrated presentation is based on research conducted at the Library of Congress during her fellowship awarded by the Swann Foundation for Caricature and Cartoon. The Library administers the foundation. The lecture, sponsored by the foundation and the Library’s Prints and Photographs Division, is free and open to the public; no reservations are required.

A century ago, two symbols most often represented the United States as national icons: Miss Columbia stood for the ideals of the American people and Uncle Sam for the government. Although featured in hundreds of political cartoons between 1852 and 1952, Columbia, who was widely regarded as an embodiment of “liberty, social justice, and equality,” gradually disappeared as a symbol of our national conscience. Through an examination of representative cartoons, Berg will explore how changing portrayals of Columbia reflect parallel changes in ideas about American identity and feminine nationalism. She will draw upon the Library’s holdings which contain numerous portrayals of Miss Columbia created for a variety of publications and audiences.

Berg is an affiliate assistant professor in the department of history at the University of Maryland. She is also an associate fellow at the Rothermere American Institute, University of Oxford, where she was a postdoctoral fellow last year. She received a Ph.D. in American history from the University of California at Berkeley where she completed her dissertation entitled, “Citizens in the Republic of Childhood: Immigrants and the American Kindergarten, 1880-1920.” She is currently revising this dissertation for publication as a book, in addition to extending her research into Columbia’s role in American identity beyond the arena of political cartoons.

This presentation is part of the Swann Foundation’s continuing activities to support the study, interpretation, preservation and appreciation of original works of humorous and satiric art by graphic artists from around the world. The Swann Foundation’s advisory board is composed of scholars, collectors, cartoonists and Library of Congress staff members. The foundation customarily awards one fellowship annually (with a stipend of $15,000) to assist scholarly research and writing projects in the field of caricature and cartoon. Applications for the academic year 2008-2009 were due on Feb.15, 2008. More information about the fellowship is available through the Swann Foundation’s Web site: www.loc.gov/rr/print/swann/swannhome
or by emailing swann@loc.gov.
Posted by Mike Rhode at 6:35 PM