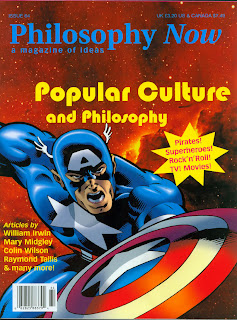 I was in a Borders recently with our man RT*, and saw the British magazine to the right and immediately scooped it up and rushed to the cash register. "Popular Culture and Philosophy" - who could resist? Inside is Major Todd A Burkhardt's article "Operation Rebirth: Captain America and the ethics of enhancement,"
Philosophy Now (November / December 2007). Major Burkhardt, who teaches at West Point according to his bio blurb, asks, "...What would be the moral ramifications of creating a real Captain America? Is the intentional creation of super-soldiers by cell engineering morally permissible?"

After a review of the concepts of freedom and supreme evil, Burkhardt concludes that the creation of a super-soldier was moral for 1940. He leaves aside the issue of whether it would be today.