Feb 28: Xxxholic and Tsubasa Chronicle Movies to be Screened at the JICC downtown 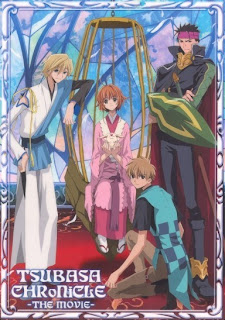 Xxxholic and Tsubasa Chronicle Movies to be Screened at the Japan Information and Culture Center, Embassy of Japan.

About xxxholic The Movie:

In the film, Yūko receives a request from a woman to help her back into her mansion which for some reason does not allow her to enter. Yūko says since Watanuki was the one who brought the client to her, Watanuki should be the one to grant her wish, and therefore brought along. Dōmeki is also brought along to help and Yūko attends not only to grant her client's wish but also because she is invited to the mansion where many famous collectors were also invited with the same letter. Inside the mansion are strange rooms and mysterious letters telling its guests what do to in place of a host. Though the collectors think up the theory of a mysterious auction being held like in an urban legend, it becomes apparent that something more sinister and mysterious going on. One after another, each collector disappears and a number of other strange occurrences happen during the night. The real reasons behind the invitations must be discovered in order for Yūko and company to get to the bottom of this mystery.
60Minutes

About Tsbussa Chronicles The Movie: In their continuing journey to find the feathers that are the fragments of Sakura's lost memory, Syaoran, Kurogane, Fay, and Sakura move through time and space with Mokona. Here, they visit the "Country of Birdcages," a seemingly peaceful country where people and birds live together, each person having a bird companion. After a boy named Koruri confuses Syaoran and Sakura for "bodyguards" and attacks them, they learn that the king of the country possesses a mysterious power. Princess Tomoyo, Koruri, and the other oppressed citizens, having had their birds taken from them, live in hiding within the forest. In order to take back Sakura's feather, Syaoran and the others stand up against the scheming king.
35Minutes

Both Movies are based upon the Manga by Clamp.

Both Movies will be shown in Japanese with English Subtitles.


This event is free and open to the public. Reservations are required.

please visit the Japanese Information and Culture Center website at

http://www.us.embjapan.go.jp/jicc/ or visit the DC Anime Club website at
http://dcanimeclub.org.

DCAC was established in 2003 to introduce and educate people in the Washington,DC area about East Asian culture, through viewing and discussion of Japanese animation (also known as anime) and Japanese comics (manga). DCAC is a 501(c)(3) not for profit organization, contributions to DC Anime Club are taxed deductible to the extent allowable under the law.

In addition to our weekly meetings, the club holds an Annual Art Show, an Annual Costume fundraising event, and visits local schools to do presentations
on anime. The club also works with the Smithsonian Freer Gallery and DC Asian Pacific American Film Festival on their anime screenings, and has helped locally promote performances for Japanese bands such as Puffy Ami Yumi and Pine am. DC Anime Club was founded by Chris Wanamaker (President), Jules Chang (Vice President) and Craig Vaughn (Sgt in ARMS) on Saturday June 5, 2003. We have a strong membership that continues to grow -- most of which are teenagers.

About Japan Information and Culture Center:
The Japan Information and Culture Center (JICC) is the cultural and public affairs section of the Embassy of Japan in Washington D.C. Our primary role is to promote better understanding of Japan and Japanese culture by providing a wide range of information,educational services and programs to the public. The JICC is located on the lower level of the glass-enclosed Galleria at Lafayette Centre III in downtown Washington, D.C. Its facilities include a research library, a 152-seat auditorium, and a 1,500-square-foot exhibition gallery where a wide variety of events sponsored by the JICC are hosted throughout the year.