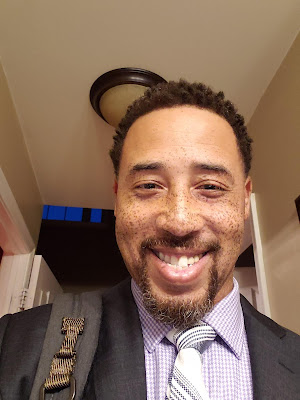 I'd like to start by apologizing to Patrick Foreman for the late appearance of this interview. He responded quickly to our usual questions, but I dropped the ball and let it slip down my email page. So for bonus content, at the end of this interview, find a link to some other interviews with him about his upcoming Black Cotton comic, as well as the ordering page from Diamond's Previews.

Set in an alternate reality where the social order of “white” and “black” is reversed, an elitist family, the Cottons, are rocked by a tragic shooting that begins to unravel long standing family secrets that could not only destroy the family but also divide the fragile social climate of the world. Elijah Cotton, the modern patriarch of the Cotton family and business mogul of Black Cotton Ventures, tries to manage the public outrage and fallout from his police officer son, Zion Cotton’s, shooting of a young white woman. Meanwhile, Qia Cotton, the only daughter of Eljiah and the CEO of Black Cotton Ventures, attempts to assuage the situation by paying off the victim and her family; Xavier Cotton, the youngest Cotton and sophomore in high school, works on a history project that takes him down a rabbit hole of family history. 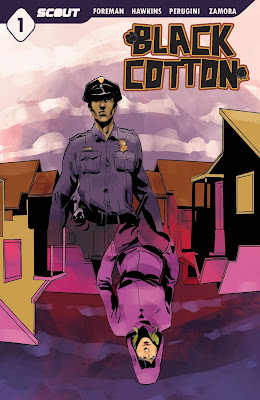 Brian and I are the creators and writers of Black Cotton, a comic book series published by Scout Comics.  Black Cotton is actually my first comic book writing project, while Brian has been writing for years and has several amazing issues coming out. He has a self-published comic called Don’t Ever Blink Chapter 2 on Kickstarter right now and Devil’s Dominion with BlackBox Comics comes out in December.

Overall, we have an amazing Black Cotton team with  art done by Marco Perugini, letters done by Francisco Zamora, and graphic design done by Jerpa Nilsson.

As a team, we do a combination of it all.

I was born in the 1970s,  in Crossett, Arkansas, but raised mostly in Virginia Beach.  In Arkansas, I lived in a very small town called Hamburg.  Many may lose their heads on hearing this (lol) - because another famous person who played basketball with Michael Jordan is from there too -- you know him, Scottie Pippen.  He is actually in my yearbook!  Our town was so small -- there was only one school at that time so when I was in kindergarten, he was in High School… Same school, same year book.

Why are you in Virginia now?  What neighborhood or area do you live in?

I got stationed at Quantico, VA back in 2014.  Then I retired after 25 years in the Marine Corps in 2018,  and the wife and I decided to stay here in Virginia.

What did you do in the Marines?

I was a Career Planner.  So I helped the Marines make mutually beneficial decisions for themselves and their families while doing the same for the Marine Corps Institution.  It's basically the HR section for the Marine Corps.
What is your training and/or education in cartooning? 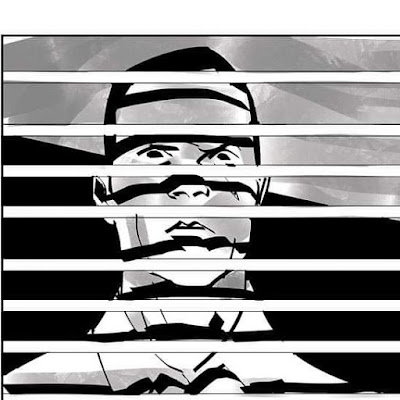 I’m actually mostly a collector.  I grew up reading comics and from the start I would always buy two copies, one to read and one to put away.  I still enjoy comic books today  --the artwork, masterful storylines.  Brian has been one of the greatest teachers and mentors I have had throughout this process. He was able to take our conversation and layout a roadmap to where we are today.  Much Respect to Brian.

I wouldn’t change a thing.  Everything I have gone through thus far has grown me to the person I am today… Led me to my beautiful wife and molded me for the future places before us.  Still learning and still growing – those things will always remain constant.

Actually, I am best known for two things: my 2020 award winning gospel song “He’s Able" featuring David Scott and my magazine with Todd Dubose, Returning Citizens Magazine, which is currently viewed by more than 1.2 million Incarcerated Individuals daily across the nation.

How did you start to work with Scout Comics?
Co-Creator Brian Hawkins has made some great connections throughout his career.  Meeting and becoming good friends with Brendan Deneen, the CEO of Scout Comics, was one of them.   We talked out several options about how to bring Black Cotton to the world and Brian mentioned Scout Comics.  We decided to show it to them and they loved it.  They came back saying they would love for us to join the Scout Family.  It was off and running from that moment forward. 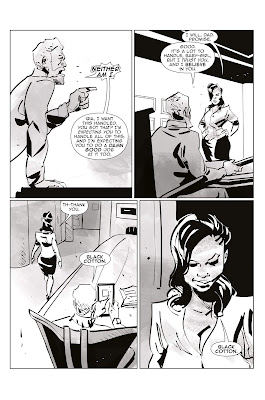 I would love to see Black Cotton on the TV screen.

I am looking forward to the evolution of comics.  I feel this Covid Era has given many a time to pause and go back to their creative stages.  We were so busy before that we didn’t have true time to just be creative – brainstorm, look at it – step away and come back.  We had hard deadlines to meet.  We have time now.  The question is what are they doing with that time?  These next few years will answer that question.

The African-American Museum, but start at the bottom first though.  It is a lot to take in just one day.  It really is a two day venture.

How has the COVID-19 outbreak affected you, personally and professionally?

I have been blessed during this time.  My wife and I are both retired Marines and both of us work for the federal government too, so with our jobs we were able to switch over to telework fairly easy.  I feel for the nation and cannot wait till we are looking back on this moment in our history.