A few books that would make good gifts have come in -- well, a lot have, but I'm behind like everyone else these days. Part of my problem is that, as an editor, I assigned two of these to academic reviewers for the International Journal of Comic Art, and then I read those reviewers opinions... so I've linked to those reviews as well. 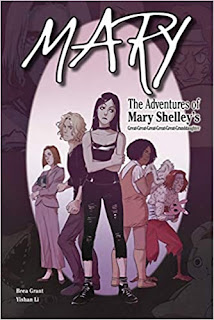 From the book's Amazon page, we learn - When angsty teenager Mary Shelley is not interested in carrying on her family’s celebrated legacy of being a great writer, but she soon discovers that she has the not-so-celebrated and super-secret Shelley power to heal monsters, just like her famous ancestor, and those monsters are not going to let her ignore her true calling anytime soon. Everyone expects sixteen-year-old Mary to be a great writer. After all, her mother, her aunt, and her grandmother are all successful writers (as they constantly remind her)―not to mention her famous namesake, the OG Mary Shelley, horror author extraordinaire. But Mary is pretty sure she’s not cut out for that life. She can’t even stay awake in class! Then one dark and rainy night, she’s confronted with a whole new destiny. Mary has the ability to heal monsters… and they’re not going to leave her alone until she does.

I enjoyed this book thoroughly. I'm a big urban fantasy reader these days, especially of books written by women. It's a good choice for a young adult who likes manga, or Buffy the Vampire Slayer. It's funny, and well-drawn (by Li), with some minor family drama, but a lot of fun ideas. As an older white man, I'm not the target audience, but I'll be buying the rest of this series for myself as it comes out. Li's an artist I wasn't familiar with, but I'm going to look into more of her work (some of which is apparently not for this age group). 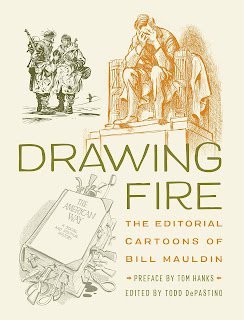 From the book's Amazon page, we learn - The first career-spanning volume of the work of two-time Pulitzer Prize-winning cartoonist Bill Mauldin, featuring comic art from World War II, Korea, Vietnam and Operation Desert Storm, along with a half-century of graphic commentary on civil rights, free speech, the Cold War, and other issues. Army sergeant William Henry “Bill” Mauldin shot to fame during World War II with “Willie & Joe” cartoons, which gave readers of Stars & Stripes and hundreds of home-front newspapers a glimpse of the war from the foxholes of Europe. Lesser known are Mauldin’s second and even third acts as one of America’s premier political cartoonists from the last half of the twentieth century, when he traveled to Korea and Vietnam; Israel and Saudi Arabia; Oxford, Mississippi, and Washington, DC; covering war and peace, civil rights and the Great Society, Nixon and the Middle East. He especially kept close track of American military power, its use and abuse, and the men and women who served in uniform. Now, for the first time, his entire career is explored in this illustrated single volume, featuring selections from Chicago’s Pritzker Military Museum & Library. Edited by Mauldin’s biographer Todd DePastino and featuring 150 images, Drawing Fire: The Editorial Cartoons of Bill Mauldin includes illuminating essays exploring all facets of Mauldin’s career by Tom Brokaw, Denise Neil, Cord A. Scott, G. Kurt Piehler, Jean Schulz, and Christina Knopf, with a Preface by Tom Hanks.

This book is aimed at me - an older white male - except most of Mauldin's career took place before I was an adult. Never mind that ... he was an excellent cartoonist and a true proponent of a free and equal America with rights for all. After these past four years, we need to return to his values more than ever. While I got a review copy from the Pritzker, I would have gladly bought this is I saw it in a store first. Todd DePastino does an excellent job rounding up a diverse group of essays and providing the relevant grounding for cartoons that can be 70 years old now. IJOCA's review is here. 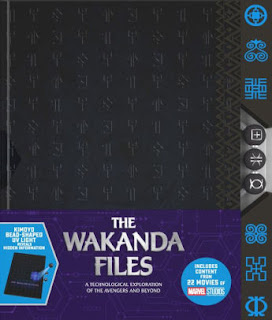 From the book's Amazon page, we learn - An in-world book from the Marvel Cinematic Universe, The Wakanda Files—compiled by request of Shuri (Black Panther and Avengers: Infinity War) as part of her quest to improve the future for all people—is a collection of papers, articles, blueprints, and notes amassed throughout history by Wakanda’s War Dogs. In a nod to Wakandan technology, the pages of the book have a printed layer of UV ink with content that is visible only under the accompanying Kimoyo bead–shaped UV light. Within the Marvel Cinematic Universe (MCU), Wakanda has been on the forefront of what is technologically possible. Their ability to stay ahead of the rest of the world is second only to their ability to keep themselves hidden. As the architect behind many of Wakanda’s great advancements, Shuri is constantly seeking ways to improve what has come before. To aid in her search, she researches the past for context, reference, and inspiration by compiling The Wakanda Files. Organized into areas of study, including human enhancement, transportation, weapons, artificial intelligence, and more, The Wakanda Files trace the world’s technological achievements from the era of Howard Stark and early Hydra studies to modern discoveries in quantum tunneling and nanotechnology, weaving together the stories, personalities, and technology that are the fabric of the MCU.

This book is aimed at a young adult audience too, probably received as a gift, given the price. It must be popular this season as Amazon appears to be sold out. As a teenager, I would have loved this book. As an adult, I admire the cleverness of the packaging (especially that little uv light which is the middle detachable ball there on the right in the photo), and the conceit of being a set of spy reports from the MCU. There's not enough Black Panther in here, which makes sense because the book is a report to him, but that may disappoint people who expect to find him in a book with Wakanda in the title. In conclusion - a good grandparent's gift to a fan of Marvel movies, if not the comic books. IJOCA's review is here.

All 3 books were provided by the publisher's representatives. We don't receive anything but the books, and that includes advertising or link revenue. So buy them from your local store if you can.