Right about now, I'm sure most of you are laughing yourselves silly at all the Progressives out there who voted for Biden under the delusion that they could "push him left", when anybody with two brain cells to rub together could take a look at his record over the past 40 years — not to mention his lineup of Cabinet picks — and see that anybody who thought they could push that sonofabitch left is on some kind of weirded-out psychedelic voyage.

Take, for instance, this whiny-ass tweet from the knobs at DNC front group Sunshine Movement: "We elected you, Joe, now it's time you act"...

Oh, f'crissake, give me a big, fat break. The old bastard IS acting. He came right and said that "nothing would fundamentally change" and that he wouldn't ban fracking right out in front of God and everybody.

"Progressive" voters bought that horseshit like a bunch of ignorant-ass rubes, and now the DNC is doing the equivalent of taping a big "Kick me hard" sign onto their backs, like we used to do back in seventh grade — and I, for one, have sub-zero sympathy for those losers. 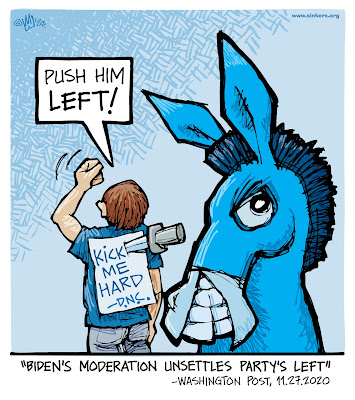 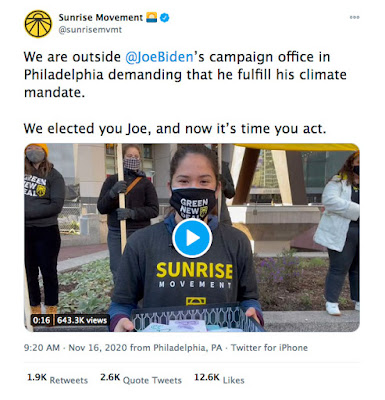