Mitchell MacNaughton's caricatures and cartoons recall the 1960s as well as today's issues. He's sharing a room at Artomatic in Crystal City and agreed to answer our usual questions. 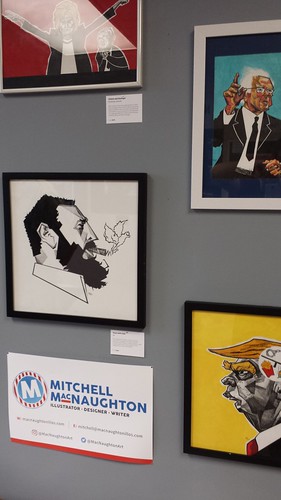 
Many people would label my work as political cartooning, although that’s not quite how I would describe it. Sure, for many pieces I use ink and my subject is political, but I think that there in a certain refinement that would put it closer to the art side rather than the cartooning side.


If I’m solely creating a black and white piece, my tools include micron pens, black India ink, and either charcoal or a black colored pencil. If I’m creating a piece in color, it could range from gouache to watercolor with certain elements re-colored digitally.


I was born in 1989 on farmlands in Western New York, where I would live for 17 years until I left for Pittsburgh.

Why do you draw and comment on characters and events from the 1960s?

I find mid-century America fascinating because the dynamic of the country completely shifted in a handful of years. President Kennedy came to office on a wave of optimism as the U.S. came to terms with it’s post-war life, then his death is the first in a dark period that saw other assassinations along with riots and strife, and the decade comes to a close with the start of one of our lowest points of the modern century - The Vietnam War. It’s span of years that starts out on a high and bottoms out in a low, and for some reason that intrigues me. 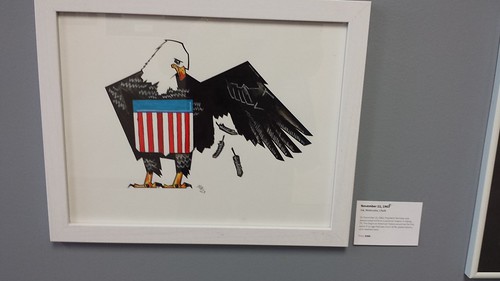 
I had always wanted to live in DC, as it’s a natural fit for somebody with my artistic themes, and after years of plotting a planning I finally got my chance when I was offered a job at a political direct mail agency. While here, I have never lived in any neighborhood outside of Alexandria.


While in studying for my degree in graphic design, I knew that my priority was becoming an illustrator. Thankfully for my perseverance, I had many teachers who insisted that I would fail or that the market was too crowded, so while I was in their classes I would look up artists and and search illustration advice websites out of spite. I took what I was learning in my design courses and let that influence certain facets of my drawing that created my current style.


Currently I am obsessed with Kukryniksy - a group of 3 artists who created work out in Russia during World War 2. In fact, I would say that the whole era of political art during World War 2 had a great effect on me. Artists used their astounding talent at a time when the world was witnessing pure evil, and the artwork was unyielding. 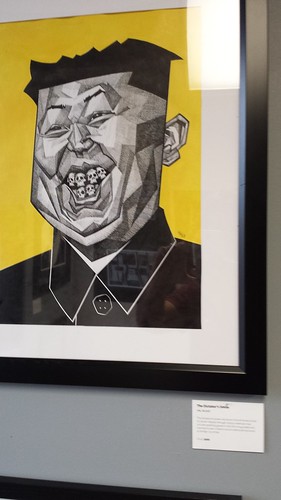 
I would work up the confidence to promote myself much earlier. I am the only artist in my family, so I was (and to an extent still am) blindly wandering around trying to figure out what to do, and that creates a sense of never being good enough to compete with those who seem to have it figured out.


To the extent that I am known, it would probably be for my drawing style and political subject matter.


I am most proud of creating artwork that highlights certain news stories in the world that may not get as much attention, such as the human rights abuses of Bashar al-Assad or civilian casualties of drone strikes. When you are a political artist, it can be very easy to take the easy attack on a subject, suck as making Trump bright orange, and while that can be fun it should not be at the expense of using your skill to touch on other issues.


One project that I have had on my mind is an animated story/documentary about my uncle’s time in Vietnam and his life after being exposed to Agent Orange, but that is a hefty project that requires many steps in the build-up. Another interest I have been wanting to purse is taking classic literature and spoofing/rewriting them to mock out current political climate.


If I’m feeling the rust coming on then I have to get up and step away from my desk, because I know that if I don’t I will just end up on Youtube and destroy my entire night. Usually I can go play video games for an hour or so to refresh myself and get back in a work mode. 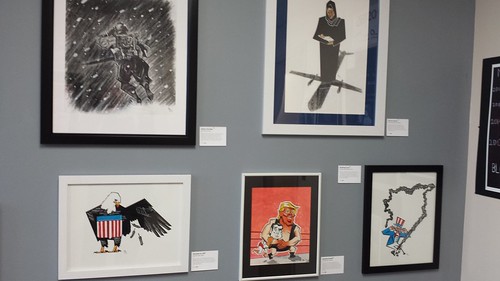 
That’s so hard to say. The illustration and art field feels like it is and has been going through such a rapid transformation with the shifting a mediums that they depend on, such as print media and the freelancing economy. All I can do is keep making my work and hoping that I can find new ways to keep it from becoming stale.


I have only attended Small Print Expo as a visitor, where I spent most of my time at the Fantagraphics’ tables.
What's your favorite thing about DC?


I absolutely love the amount of food choices. Possibly it’s because I’m originally a small-town rube, but I’ve become so much more adventurous in my eating here simply because the options are all present for you to try.

Least favorite?
Transportation as a whole. The Metro system only functions in various stages of broken, making a two station trip take upwards of 30 minutes. That isn’t to say that driving is any better, because the drivers here are absolutely wild. Trying to get out of D.C. on these roads with it’s drivers is like trying to escape from a Supermax prison. Nearly impossible.


My favorite without hesitation is the Presidential portrait room at the National Portrait Gallery. 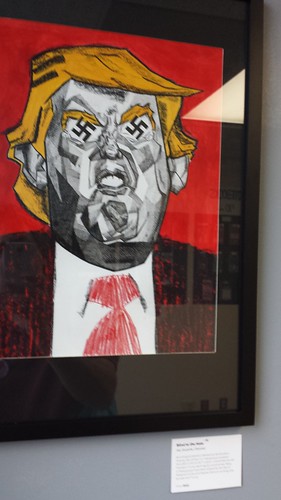 
Cape Banh Mi in Alexandria. The catfish is one of the best things I have eaten.


macnaughtonillos.com for my art and artotunion.com for my blog.
Posted by Mike Rhode at 1:13 AM