Meet a Local Cartoonist: A Chat with Sean Hill 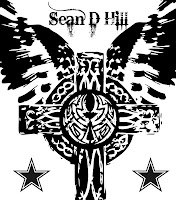 
Sean Hill is a local comic book artist, born and raised in DC proper, who seems poised for a breakout via his work for Zenescope. He was recently interviewed by another blog and I realized we hadn't submitted our usual questions to him.

Well some of the very first jobs I got hired for were horror based short stories, the most recent works for those are for Zenescope Entertainment's Dark Shaman mini series. It was about  long dead Native Shaman that returns from the dead to try and exact revenge/justice for the death of his tribe. Not to long afterwords I got a chance to draw Grimm Tales of Terror: The Monkeys Paw, I was really happy for that gig because it was a horror story I already knew of. I have also worked on some action/adventure for Jaycen Wise: Secret of the Rose, Route 3 for Terminus Media, and most recently issues 4 through 6 of Zenescope's E.V.I.L Heroes which was more superhero action.

It's a combination of traditional and digital, I work out my thumbnails traditionally in my sketchbook. I own an 11x17 moleskine sketchbook that I draw up 2x3 inch rectangles, then I work out all my thumbs in those. After that, I open a story file in Manga Studio 5EX (a story file is a file created by the program that has as many pages as you determine you need to draw), I scan and copy/paste all my thumbnails onto the subsequent pages and work over them.

I was born in Washington DC waaaayyyyy back when in 1981.

I grew up in the Georgia Avenue/Perworth area in DC. That area has gone through so many changes but is the nature of the city, anything can change within 15 years or so. Right now I live in Hybla Valley in Alexandria, VA.

My grandfather, Otis Hill, used to to show me a lot of stuff when I was 6 years old, after that I was introduced to my mento Kofi Tyus, Kofi has been working as an artist in D.C. His whole life so most of my training comes from him. I also went to and arts high school, Duke Ellington School of the Arts and a short stint at Maryland college of art and design. I mostly had a lot of fine art training most of my life.

Too many to name but from a kid I was inspired by Bernie Wrightson, Jim Lee -- that kind of stuff -- also artists like Mshindo Kuumba, Ivan Reis -- the list goes on.

It's kinda funny, but whenever I get asked for advice by a artist wanting to do comics, I typically advise they first start making there own books, it's more fulfilling working on your own thing and telling your own stories. But when I was trying to break in I thought I needed to start working for a publisher, any publisher. I think if I could do it over I would take my own advice.

I'm not really sure, I guess it would be between Route 3 or E.V.I.L Heroes right now.

I'm honestly really proud of my work on Route 3 and some upcoming work I did on a book called the Guilded Age (issue 3). I put a lot work in trying to make sure that story had the vibe of taking place in its own multi-layered world.

I have two personal projects I would like to have done. One is Nazireth, a fantasy retelling of the Christ story, drawing from the historical social and political issues that influenced the narrative of those events. The other is Yasuke: Lineage a story of a former slave turned Samurai, based on the historical figure Yasuke whom served under Oda Nabunaga.

I think all visual story-telling is a form of problem solving, so when I'm in a rut, I honestly look at as many artists as I can to open up my mind to the possibilities of solving a story-telling issue.

Comics is a slow changing river: it flows, the current changes but not to dynamically. I hope the Indy Comics market will grow in the sight of the consumers. Much of the diversity that's being called for in mainstream comics is already available in Indy Comics. In Japan, Manga is marketed towards almost every youngster's walk of life, but here it's dominated by adult male audiences. I'm fine with those male audiences holding the share of consumerism they have, but if the  medium were marketed to even wider audiences, it could only grow stronger.

Not too many Cons. I'm typically at Awesome Con and I have attended Baltimore and New York Comic Con pretty recently. I hope to expand on that in the near future.

Honestly, it's because we're so small, you could grow up here with you childhood friends and make something of yourself, without loosing contact, because we still have some of the opportunities of a metropolitan city.

Sometimes DC seems like it's trying to be a mini New York, in how it advertises to business and resources outside the city, while not making as much use of its resources in the city. Not to get too political, but so much of the growth in DC for the last 20 years have been stimulated from outside the city. I sometimes think "Come on, we don't have to be New York, we're D.C. -- we got this" but I digress.

Oh man, the National Gallery of Art, The Portrait Gallery is a definite favorite, I love the African American museum, and most definitely the American Indian Museum.

The Good Stuff Eatery -- no question.

Yup, it is www.nazirstudios.blogspot.com
Posted by Mike Rhode at 11:02 AM