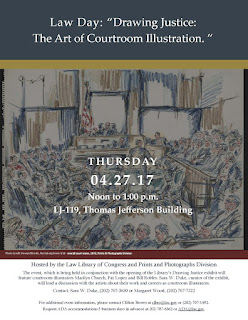 A new exhibition at the Library of Congress, "Drawing Justice: The Art of Courtroom Illustrations," will feature original art that captures the drama of high-profile court cases in the last 50 years.

"Drawing Justice" is made possible by Thomas V. Girardi and the Swann Foundation for Caricature and Cartoon.  In addition, Girardi—the founding partner of Girardi Keese, a Los Angeles law firm—funded the acquisition of 95 high-profile trial drawings by Aggie Kenny, Bill Robles and Elizabeth Williams for the Library's collection.  As a result of this benefaction, the Library's courtroom illustrations are the most comprehensive in any American institution.

The exhibition's illustrations—part of the Library's extensive collection of more than 10,000 courtroom drawings—are the work of talented artists hired by both newspapers and broadcast outlets to capture the personal dynamics of legal trials, which for many decades were off-limits to photographers and television cameras.  The artwork brings the theater of the courtroom to life, capturing gestures, appearances and relationships in a way that humanizes the defendants and plaintiffs, lawyers, judges and witnesses.

The 98 illustrations on display will represent court cases dating from 1964 to the present day, including trials for murder, crime and corruption, terrorism, political activism and landmark legal issues.  Among those depicted will be Jack Ruby, James Earl Ray, Charles Manson, David Berkowitz, John Gotti, the Chicago Seven and Bernie Madoff.  Artifacts from the Library's Manuscript Division and the Law Library will supplement the drawings from a legal perspective.

Also on view will be an introductory video and an interactive video station that show the actual drawings from the exhibition being featured on television nightly news broadcasts.  This footage demonstrates the important contribution courtroom illustrators make in bringing the drama of the court, and an understanding of the day's events, into the homes of millions of Americans.

The exhibition begins with the work of Howard Brodie, who popularized reportage-style courtroom illustrations with his documentation of the Jack Ruby trial in 1964 for CBS Evening News.  Ruby had been charged with killing Lee Harvey Oswald, who allegedly assassinated President John F. Kennedy in 1963.  Brodie supported and encouraged the first generation of artists who created the artwork for television and print media.  Brodie donated his trial drawings to the Library of Congress, which spurred the development of the courtroom-illustration collections.

The exhibition is curated by Sara W. Duke, curator of applied and graphic art in the Library's Prints and Photographs Division.  Assistant curator is Margaret M. Wood, a senior legal reference librarian in the Library of Congress Law Library.  Betsy Nahum-Miller and Carroll Johnson, from the Library's Interpretative Programs Office, are the exhibition directors.

The Library has amassed the largest publicly accessible collection of courtroom illustrations through a series of gifts from artists, their families  and heirs. Howard Brodie, with his donation of 1,400 drawings—for such seminal trials as those of Jack Ruby, Sirhan Sirhan, the Chicago Seven, and the My Lai Massacre court martial of William Calley and Ernest Medina—established the collection at the Library between 1965 and 1980.  In addition, Los Angeles illustrator David Rose gave more than 100 drawings from the 1971 and 1973 Pentagon Papers trials of Daniel Ellsberg & Anthony Russo.  In 2009, the family of New York-based artist Marilyn Church generously donated more than  4,200 drawings for trials from 1974 to 2008.  In 2015, the family of New York Daily News artist Joseph Papin gave more than 4,700 drawings.  Through purchase-gift arrangements in 2014, the Library was able to acquire the work of two mid-western artists, Gary Myrick and Pat Lopez.

The Library of Congress Prints and Photographs Division preserves and provides access to nearly 16 million photographs, drawings and prints from the 15th century to the present day.  International in scope, these visual collections represent a uniquely rich array of human experience, knowledge, creativity and achievement, touching on almost every realm of endeavor: science, art, invention, government and political struggle, and the recording of history.  For more information, visit loc.gov/rr/print/.

The Library of Congress is the world's largest library, offering access to the creative record of the United States—and extensive materials from around the world—both on-site and online. It is the main research arm of the U.S. Congress and the home of the U.S. Copyright Office.  Explore collections, reference services and other programs and plan a visit at loc.gov; access the official site for U.S. federal legislative information at congress.gov; and register creative works of authorship at copyright.gov.