Q&A with Rafer Roberts about his Valiant work

Local comic book writer/artist Rafer Roberts has over the past couple of years made a transition from focusing on self-published work to writing a couple of titles for Valiant Entertainment. Rafer answered a few questions we posed to him about his experience with that.

You transitioned into doing mainstream comics about two years ago (though you still do some DIY work). What’s the biggest different you’ve experience between doing your own self-published comics and working for a comics publisher on a monthly title?

Editors and deadlines! Working on my own stuff, whether it’s PLASTIC FARM or NIGHTMARE THE RAT, is a lot of fun but (I admit) there is quite a bit more freedom in content and speed at which I work.That can be both a blessing and a curse. I am solely responsible for content and making sure that it comes out in a timely fashion, as well as responsible for all the marketing and distribution. 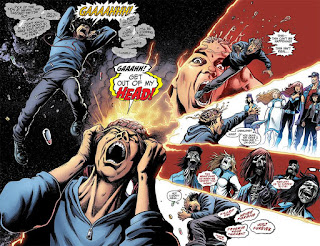 With the WFH (work for hire) stuff, there is a certain amount of back-and-forth between me and my editors, breaking down what the stories are going to be, as well as notes on how to improve said stories and ensure that they fit within the publisher’s larger plans. Deadlines give the creative process a needed sense of urgency. It’s a far different process of coming up with a comic at your own pace and coming up with a new comic every month.

I also get to work with some incredible artists. David Lafuente, Mike Norton, Darick Robertson, Ryan Winn, Ryan Lee, Juan Jose Ryp, Raul Allen, Brian Reber, David Baron, and on and on and on. It is an easy life for a writer when the art teams are as amazing as this.
You mentioned that having regular deadlines are daunting. How do you keep on track while ensuring you continue to be creative in your writing?

Being creative isn’t the problem; but being creative on a schedule can be. You have to treat this like a job and follow some kind of work routine. I get up around the same time every day, give myself the first hour to wake up, and then make comics until I have to go to the day job. Sometimes “making comics” involves actually writing a script, or drawing something, but just as often that can be revising a script, or answering email, or writing an outline or pitch. 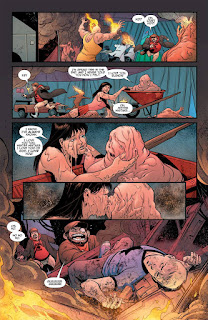 The real trick is keeping with that routine. It’s all about inertia. Once you get into a routine, once you get moving, it takes out half the effort required. If I fall out of my routine, if I don’t work for a week or so, then it is very difficult to get up and running again.
Can you briefly walk us through how you pitched yourself to Valiant? How did it pair you with the title your working on?

I had drawn a few DARKSEID AND THANOS: CARPOOL BUDDIES OF DOOM with writer Justin Jordan. Warren Simons, the editor-in-chief at Valiant, saw those and hired us to do similar comics as backups. I found that I really enjoyed working for Valiant and did everything I could to stick around. I gave Warren a few of my writing samples, and a few months later he called and asked me to pitch on a few books. Of those early pitches, ARCHER AND ARMSTRONG was the best fit and a great learning experience. HARBINGER was a much longer process, and one that involved much more back-and-forth during development. The series that is coming out right now bears very little resemblance to the initial series pitch.
What’s on your plate for the next six months?

Mostly writing HARBINGER RENEGADE. We’re building up to a huge event with HARBINGER WARS 2, which is my first event that I get to write. It’s maybe the most difficult thing I have attempted in comics thus far, but also (due to the amazing editors and art teams I get to work with) intensely rewarding. I’m also going to get back to NIGHTMARE THE RAT. I’m real close to finishing the series and want to put out a collection sometime this year. I also have a few pitches and other in-development projects out in the world, but nothing concrete enough to mention.
(Editor's note: The A&A pages are drawn by Mike Norton, colored by Allen Passalaqua, lettered by Dave Sharpe. The Harbinger page is by Darick Robertson, Richard Clarke, Diego Rodriguez and David Lanphear.)
Posted by Matt Dembicki at 10:32 PM