Is the AFDI's Draw Muhammad contest erasing its own history?


A guest editorial by Kathy Mannix

Cartoon lovers may no longer be able to access the slideshow of works submitted to the American Freedom Defense Initiative* Inaugural Draw Muhammad contest held May 3 in Garland, Tex., a suburb of Dallas. The slideshow on Photobucket was easily accessed Wednesday, May 6, when I checked out the wide-ranging talents of those who entered the contest. By Friday, May 8, I couldn't access the slideshow. Visitors to the AFDI site can still see the winning cartoon and click to view video of interviews by The United West* founder Tom Trento with attendees and graphic novelist Bosch Faustin, the contest winner.

"Wide-ranging talent" may be a tad too kind. As I remember my only view of the works, one was a scan of stick figures on looseleaf paper, most were assemblages of stock images, and fewer than five came from the drawing boards or computers of professional artists or editorial cartoonists. 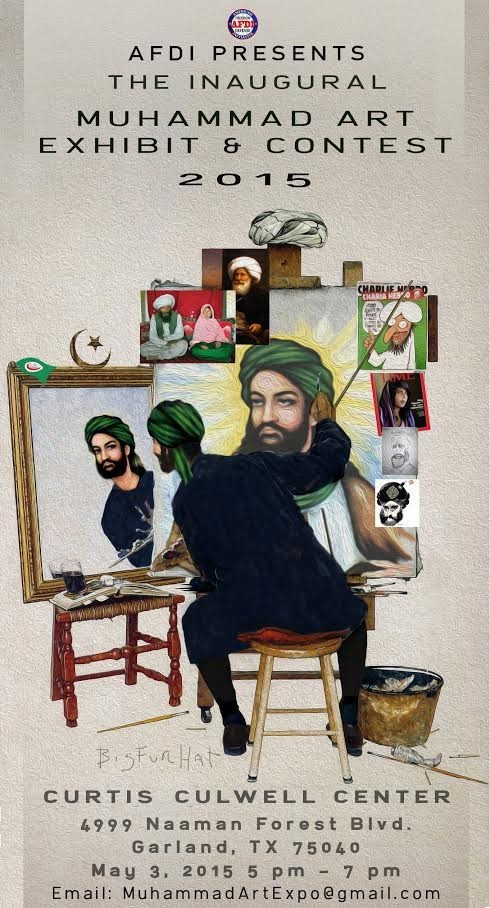 Still accessible online are the rules for entering the contest. The rules are cartoonish on there own. Rule 5 includes, "AFDI will assume that all art entered for consideration does not infringe upon the copyright of a third party. The artist shall assume all liability if an infringement claim is made." It sure seems that the estate of Norman Rockwell has an infringement claim for the event poster AFDI used at the event and has for sale from its site for $50. It doesn't seem within the realm of parody to replace the triple image of Mr. Rockwell with a triple image of Muhammad. There are parodies of Rockwell's work such as the Four Freedoms a-plenty, but self-portraiture seems a category of its own.

Rule 6 has eight bullets, including the penultimate, "The Entrant does not include any disparaging remarks relating to the Sponsor or a third party." Are all cartoon contest sponsors so thin-skinned?

Faustin's winning work shows the prophet, scimitar raised, and bubble saying, "You can't draw me!" Outside the plane of this image viewers see human hands at work on the drawing with a second bubble saying, "That's why I draw you." This cartoon won both the first prize of $10,000 and a bonus of $2,500 as a fan favorite. Reports of that double win drew me to the ADFI site Wednesday. Faustin's competitors included only one cartoonist whose work I know. An April blog post from that cartoonist reads in part, "AFDI is an anti-Muslim right-wing hate group that is intent on picking a fight with whatever right-wing Muslim hate group will take their bait." That Rule 6 infraction probably took this pro out of the running. I've reached out to him for comments on entering the contest, and await his reply.

*The Southern Poverty Law Center designates both AFDI and TUW as hate groups.
Posted by Mike Rhode at 5:08 PM