Complete, that is. Compiling it while ill, Richard accidentally left out some strips. Others were purposely left out, either because he had redrawn them for syndication, or they were too tied to the Washington, D.C. origins of the strip to make sense for a worldwide audience, or he "just felt some were not funny." Over 100 are not in The Complete CDS.

But if you're a cartoon completist, or just want a little bit more CDS, we understand and we're here for you. We've collected the lost water-colored Washington Post Magazine strips, the early inchoate musings about what the strip should be, the promotional material, the sketches for fans, and finally some fugitive Team Cul de Sac charity art by Art Spiegelman, KAL, Patrick McDonnell, Eric Shansby, Nate Beeler and others.

With Richard's blessing, or at least active acquiescence, any money the book makes will go to Team Cul de Sac to fight Parkinson's disease.

And if more art surfaces, we'll do a second edition. 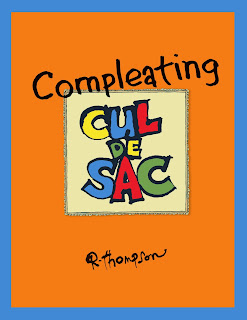