Drawing Fire From Not Drawing

by Steve Artley, Artleytoons
No. What part of that answer is unclear? Since the Danish newspaper published Mohammed cartoons a decade ago, followed by the ill-fated "Draw Mohammed" day shortly afterward; since the Charlie Hebdo murders earlier this year and after the recent fiasco in Texas — I have been prompted to draw Mohammed by some readers and others. Increasingly, I have been pressured to do so as if it is some kind of patriotic duty, or as a display of blatantly spitting in the eyes of those pesky terrorists. I have even been called a coward for not doing it, as if I am allowing myself to be intimidated by those bully militant extremists.
A coward. Wow.
I have publicly made clear my opposition to the so-called "jihadists" for their assault on the Charlie Hebdo studios (http://artleytoonsonline.blogspot.com/2015/01/je-suis-charlie-hebdo.html). Over my 30 year career, I've produced editorial renderings that unabashedly stood up against bullies and thugs. My archives are full of anti-terrorist cartoons critical of militant aggression and bullying. They're teeming with cartoons lampooning politicians, Democrats, Republicans, the Tea Party, the NRA, KKK, Neo Nazis, anti-semites, homophobes, Islamiphobes, germophobes, pedophile clergy, the Westboro Baptist Church, as-well-as ISIS, Hamas, Hezbollah, Netanyahu's Mossad, the United States Secret Service and even our own country when I think we've been aggressive and bullying. On each one of those cartoons, my name is clearly inscribed. My identity is known. The same day of the Charlie Hebdo attacks, I produced and distributed my "Je Suis Charlie" cartoon into syndication to be seen by millions worldwide and was the only one of its kind published in NEWSWEEK Japan (see inset). I have little doubt that in some dark cavern somewhere on this planet my name is already on someone's hit list. All I have to say to the latest Terrorist de jour is, "get in line, pal. I've offended much bigger jerks than you over the years." So, call me twisted. Call me warped. Call me sophomoric, stupid, ineloquent, ugly or just plain wrong. But, don't call me a coward simply because I refuse to draw an insulting image for you.
In each case of being asked, prompted, encouraged, ridiculed or bullied into drawing the Prophet, not once was I asked why I refused. While I don't feel that I need to explain something that is so obvious, I'll do it here in this forum. So, here we go. It's a pretty simple principle, really. 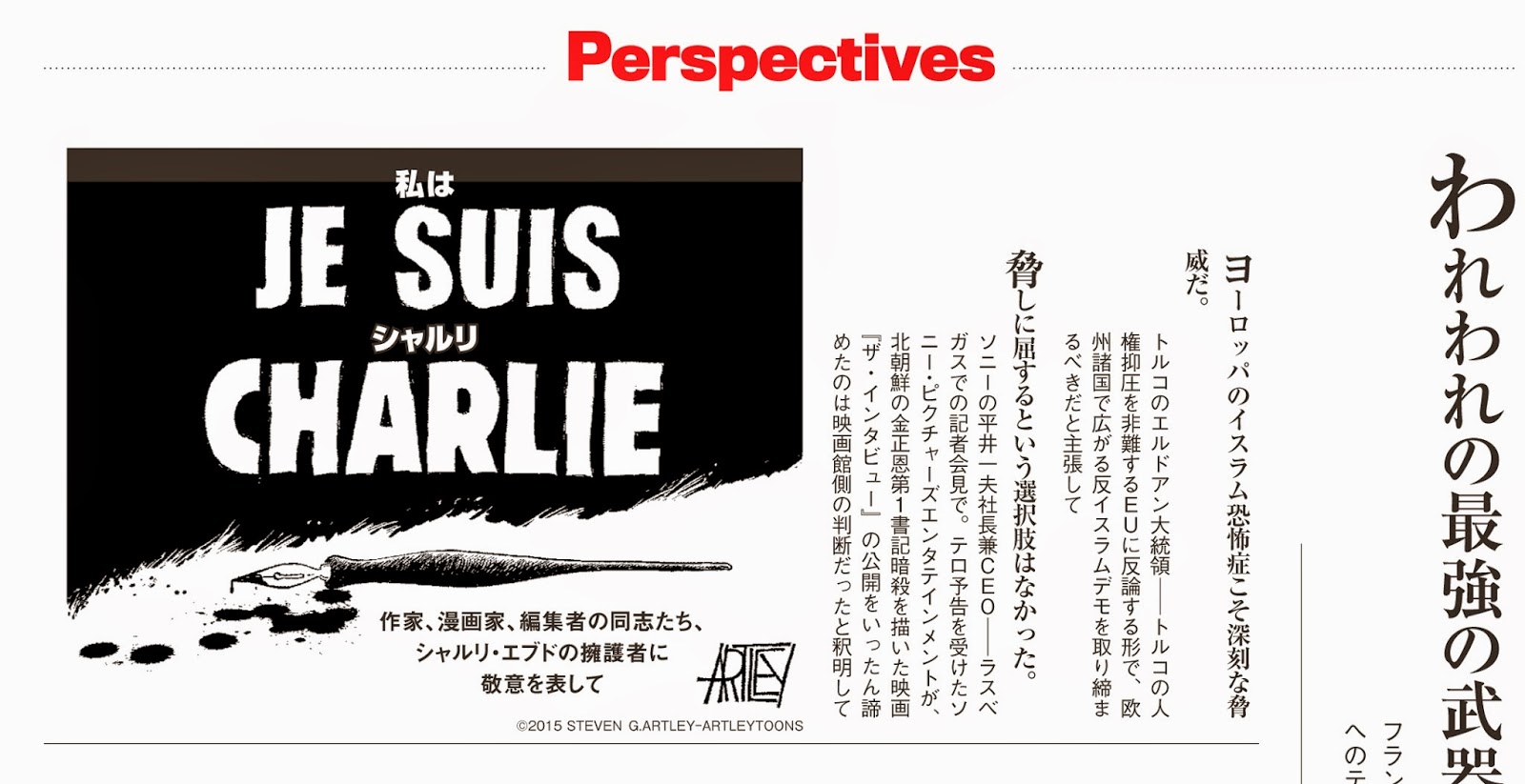 When it comes to my cartooning, I have my own standards of ethical practices. There are certain boundaries I will not cross. Drawing Mohammed falls within one of those boundaries. I will not insult an entire religion because of a lunatic fringe. I may criticize someone who does or says something in the name of religion, but will not intentionally ridicule the religion itself. Although I have drawn cartoons that some have found offensive (it's such a subjective assessment), drawing an image solely for the intent of offending any group or individual is distasteful and a violation of my personal code.

I find much of the Charlie Hebdo material distasteful and some of it down right offensive. I feel the Texas "Muhammad Art Exhibit" was without merit and designed only to insult. But, in each case it's not the material that I defend. Not in the least. What I am defending is much bigger. It's all about freedom to express, without reprisal.

Free speech, listed in the First Amendment of our Bill of Rights, is the very foundation of all the other rights. Without it and the boundless latitude it provides, the other rights have no teeth. What's more, defending freedom of speech means defending the right of those expressing ideas with which you vehemently disagree — even despise. Although my editorial renderings may ridicule the rants of the aforementioned groups, I will defend their right to rant. And, I will rigidly oppose those who would use force to silence them.
Yes, with freedom comes responsibility. That's why I have my code. But, I don't want anyone defining the parameters of that code for me. So, don't chastise me, beat me, imprison me, shoot me or otherwise forcibly silence me for what I draw (or don't draw). But, hey... if you disagree, go ahead and criticize me for it. That's your right.
"I disapprove of what you say, but will defend to the death your right to say it"
Evelyn Beatrice Hall, alias S.G. Tallentyre (1868-1956), The Life of Voltaire; 1903
Posted by artleytoons at 7:57 PM