The Art of Richard Thompson table of contents 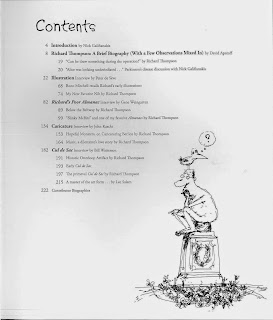 8 Richard Thompson: A Brief Biography (With a Few Observations Mixed In) by David Apatoff
19 "Can he draw something during the operation?" by Richard Thompson
20 "Alice was looking underinflated ... " Parkinson's disease discussion with Nick Galifianakis

222 Contributor Biographies
Posted by Mike Rhode at 10:33 AM