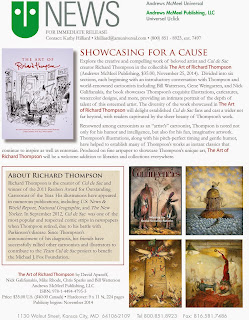 Explore the creative and compelling work of beloved artist and Cul de Sac creator Richard Thompson in the collectible The Art of Richard Thompson
(Andrews McMeel Publishing, $35.00, November 25, 2014). Divided into six sections, each beginning with an introductory conversation with Thompson and
world-renowned cartoonists including Bill Watterson, Gene Weingarten, and Nick Galifianakis, the book showcases Thompson's exquisite illustrations, caricatures,
watercolor designs, and more, providing an intimate portrait of the depth of talent of this esteemed artist. The diversity of the work showcased in The Art
of Richard Thompson will delight established Cul de Sac fans and cast a wider net far beyond, with readers captivated by the sheer beauty of Thompson's work.
Renowned among cartoonists as an "artist's" cartoonist, Thompson is noted not only for his humor and intelligence, but also for his fun, imaginative artwork.
Thompson's illustrations, along with his pitch-perfect timing and gentle humor, have helped to establish many of Thompson's works as instant classics that
continue to inspire as well as entertain. Produced on fine artpaper to showcase Thompson's unique art, The Art of Richard Thompson will be a welcome addition to libraries and collections everywhere.

About Richard Thompson
Richard Thompson is the creator of Cul de Sac and winner of the 2011 Reuben Award for Outstanding Cartoonist of the Year. His illustrations have appeared
in numerous publications, including U.S. News & World Report, National Geographic, and The New Yorker. In September 2012, Cul de Sac was one of the
most popular and respected comic strips in newspapers when Thompson retired, due to his battle with Parkinson's disease. Since Thompson's announcement of his diagnosis, his friends have successfully rallied other cartoonists and illustrators to contribute to the Team Cul de Sac project to benefit the Michael J. Fox Foundation.