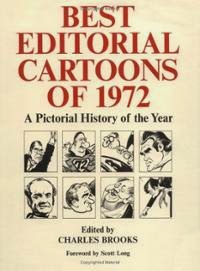 Pelican Publishing Company, which produced the annual collection of editorial cartoons, Best Editorial Cartoons of the Year, announced on November 18 that it has ceased production of the series, ending with the 2014 edition released last spring. The series, originally edited by editorial cartoonist Charles Brooks began in the early seventies and for many years was the only publication of its kind that showcased the year's political cartoons from across America, featuring work from members of the Association of American Editorial Cartoonists. Following Brooks' death in 2011, editing duties fell to cartoonist Steve Kelley.

At the time the publication began, nearly every American city had a morning and evening newspaper, and each paper had a full time editorial cartoonist. By the mid 1980's, with a greater number of newspapers being bought up by large news conglomerates that relied more on syndicated stories and art, the number began to dwindle. Now, there are less than 40 full time editorial cartoonists on staff at metropolitan newspapers in the United States. Public interest in traditional political cartooning has waned, as well. Within the past few years, online cartoon anthologies such as TIME and NPR, along with cartoon roundups once popular in the New York Times, Newsweek, and other print publications have been eliminated.

While no details have been released from Pelican on its decision to cease publication, this action comes as no surprise to those of us in the editorial cartooning field.
Posted by artleytoons at 3:01 PM