Meet a Local Cartoonist: A Chat with Reuel Smith 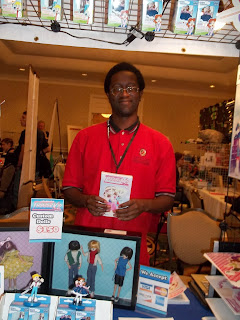 Reuel Smith was at Intervention con this fall with his all-ages comic book. Branching out like his animation heroes, he already had some neat little figurines based on the characters for sale too.

Right now I’m working on a manga-styled comic for all ages called ThunderKid.  It’s a story about a group of kids and their adventures in a world of weather.

Actually I use a healthy blend of the two.  I still do all of my pencil work by pencil and paper.  Then I scan the drawing into the computer and ink and edit using a computer tablet.

Well mostly because I’m still doing my PhD in Engineering at the University of Maryland, but primarily because I still live at home where my family still lives.  I actually live in Gaithersburg Maryland where I do most of my work. I’m mostly a self-taught cartoonist.  I picked up on it by drawing my favorite characters from comics, manga, cartoons, and anime and developed my skill as I grew.

I tend to believe that everything that happens to you happens for a reason, good or bad.  However if I could change something or do-over anything, it would probably be to get a firm handle on my message of reading a lot earlier than I did at first.

Again that would be ThunderKid.  It has been my first project that I pursued on a professional level. The ThunderKid story has only begun and I would like to keep going with it until it’s completed.  I would however like to work on an animation project within that time, like short or an episode about ThunderKid.

Well, my dad often tells me I work too hard sometimes so just resting my brain often helps when I am in a rut.  Though I feel restless when I’m not doing something active so I often doodle or sketch during my breaks.

I honestly don’t know.  I’d like to believe that with some education among authors, there will be a resurgence of all-age comics and comic authors, which is something that I’d love to see again.  There are already signs of this in recent years though, from efforts by DC and Marvel to create all-ages content to more attention to the family at comic and anime conventions. What local cons do you attend?  The Small Press Expo, Intervention, or others?  Any comments about attending them?

In recent years, since mid 2011, I had pulled away from the convention scene in favor of more traditional marketing scenes where there’s more attention to the family.  These include the Fenton Street Market in Silver Spring, Maryland and the annual Montgomery County Agricultural Fair held during the summer in Gaithersburg, Maryland.  Fenton Street Market is a very friendly group of vendors and craftspeople and I’ve had good times there.  The same goes for the Montgomery County Fair where I have recently concluded my third outing.  Though there’s a good following from those events, I have recently decided to reintegrate the convention scene back into my current arenas starting with Intervention.  We had a good outing this year and met and reconnected with a lot of great artists.  I’m looking into attending some Comic Cons in the near future such as New York Comic Con as well as anime conventions Katsucon (DC) and Otaku Fest (Ellicott, MD) next year. At every event we attend I consider it a success when we can educate any number of people about ThunderKid and connect with fellow vendors.

I would have to say that getting lost in DC is my least favorite thing.

The Air and Space Museum and the Museum of Natural History.

I have a couple including Red Robin and Hakubas.