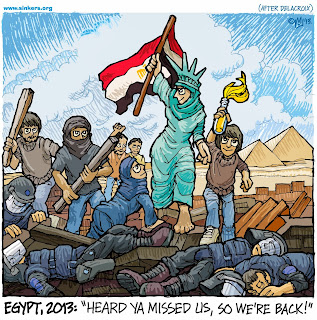 Mike's sent another one over the e-transom.
"Egyptian Revolution no.2 (After Delacroix)"
http://sinkers.org/stage/?p=1416

Anyone who knows my work will tell you that I really love parodying famous works of art, and the recent revival of revolutionary action in the streets following the Egyptian government's newly-passed law restricting public protest seemed the perfect time to do my version of one of my favorite 19th Century French paintings: Eugene Delacroix's Liberty Leading The People.

All across Egypt, ordinary people are taking to the streets to assert their rights in defiance of government efforts to criminalize public protest. A mass student strike in Cairo proetsting the police shooting of a student demonstrator this week displayed the kind of courage in the face of state violence which should inspire the meek and cushy-living activists of the US to bolder action -- but will probably not.