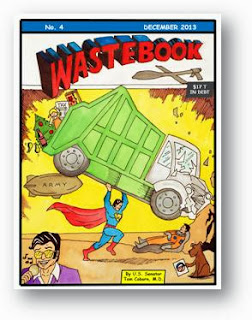 Senator Coburn (R-Okla.), ranking member of the Homeland Security and Governmental Affairs Committee, released "Wastebook 2013," highlighting 100 examples of wasteful and low-priority government spending totaling nearly $30 billion. Of interest to us is the cover and Chapter 2:  "It's a Bird.  It's a Plane.  It's Superman! – (National Guard) $10 million.