Joe Sacco (and others) at Politics and Prose 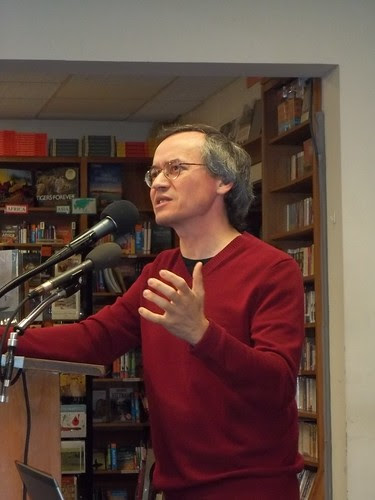 Joe Sacco did a nice talk about his new bookish-thing, The Great War, at Politics and Prose. The audience was far more World War 1 buffs than comics buffs, although cartoonists Art Hondros, Barbara Dale, and Michael Cavna were in the audience as well as journalist Peter Carlson and cartoon librarian Sara Duke.  Politics and Prose eventually gets the video online.

Here's video of some earlier P&P events that haven't been linked to yet:

MISSION IN A BOTTLE by Seth Goldman
http://www.politics-prose.com/video/mission-in-a-bottle
http://www.youtube.com/watch?v=-gYfmPeM2xM
Seth Goldman spoke about his book, Mission in a Bottle, at Politics & Prose on Tuesday, September 10, 2013.

The Growing Up With Graphics Graphic Novel panel took place at Politics & Prose on Thursday, April 25, 2013.

Prominent and award-winning graphic artists, authors, and editors Eleanor Davis, Nathan Hale, Andrés Vera Martínez, and Mark Siegel, will be here to discuss the significance of the genre for readers of all ages. Moderated by Michael Cavna, author of "Comic Riffs," a blog of The Washington Post.
Posted by Mike Rhode at 7:04 PM