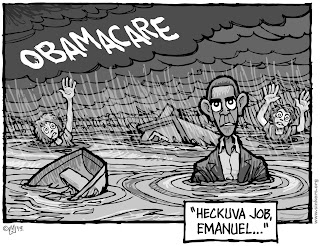 The recent implosion of healthcare.gov and the millions of people losing their health insurance despite Obama's promise (and we know what that's worth) have created a "perfect storm" of FAIL which is leading many to refer to Obamacare -- uh, sorry, the Affordable Care Act -- as "Obama's Katrina".

In the meantime Obamacare architect Ezekiel Emanuel, brother of Chicago mayor and Obama flunkie Rahm Emanuel, is telling anybody who'll listen that this pain parade is somehow the fault of Fox News. I'll grant you, Fox News is a veritable media cesspool responsible for pimping all manner of slimy skankiness, but anyone paying the remotest attention over the past month will tell you that Fox News didn't have anything to do with this FAIL festival.

While that business is going on, House Minority leader Nancy Pelosi is all over MSDNC... uh, MSNBC... swearing up and down that Democrats are totally in line behind Obamacare. Yeah, sure, Nancy, just keep telling yourself that. Perhaps in some weirded-out dreamscape of yours, Democrats are in lockstep behind Obama's corporate healthcare sweetheart deal, but out here in objective reality, buttloads of Democrats are running from Obamacare like it was a house on fire.

I can't pretend I'm not enjoying this.

"Obama Blunders Into His Own Katrina", Washington Times 11.17.13
http://www.washingtontimes.com/news/2013/nov/17/second-term-blunders-give-obama-his-own-katrina/


(And btw, I'm sure many of you are wondering what a hardcore Leftie like myself is doing citing articles at conservative news sites. Well, I'll tell you... it's a goddamn' shame that I have to read the Washington Times and Newsbusters to get even half a clear idea of what the hell's going on, because MSNBC is full of nothing but pimping and shucking these days. Think of it this way: I'm reading that crap so you don't have to.)