Tonight: Between the Panels panel - Free! 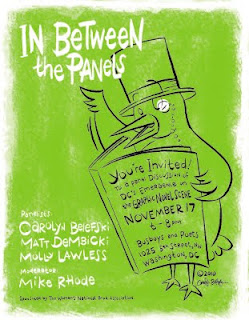 The Women's National Book Association, DC Chapter will sponsor a panel discussion on the DC graphic novel scene. The panel for the event, to be held at Busboys & Poets , from 6:00 to 8:00 p.m., will include Carolyn Belefski, Molly Lawless, Matt Dembicki, and Mike Rhode. The event is free and open to the public.