Just some quick notes and photos as Sara Duke is doing the formal writeup for the International Journal of Comic Art.

Sara and I took a meandering trip down, stopping at antique stores and trying to stump each other with obscure comics knowledge. As previously noted here, the exhibit is in the non-profit Second Street Gallery, Charlottesville, Virginia.

It has six artists - Frédéric Coché (France), Aerim Lee (South Korea), André Lemos (Portugal), Ilan Manouach (Greece), Andrei Molotiu (US) and Fabio Zimbres (Brazil) and was curated by Pedro Moura (Portugal) and Charlottesville's Warren Craghead III. Although Pedro declared that the art was all just 'comics,' these really are art comics. A companion book, Divide et Impera, by Pedro gives a good overview of the artists and their artwork. Pedro, Warren and Andre were at the show, and it was a pleasure to meet with them and talk about the exhibit. Andre did a special mini-comic/zine just for the exhibit and probably on the plane flight over. I bought a copy of this, the exhibit companion book, and many of the other publications for sale for Michigan State University's Comic Art Collection should one like to see them in the future.

The exhibit suffered somewhat from being trimmed significantly at the last moment due to a smaller gallery size than expected. The version shown in Amador in Portugal was much larger and included Craghead's work which was left out of this version. Of the artists, I was only familiar with Zimbres previously (and Molotiu's academic writing on comics). I'll leave it to Sara to get into the details, but I was especially taken with Cloche's aquatint comics - essentially he engraves a plate and prints 10 of them (according to Pedro) and then cleans the plate. He sells the engravings while reproductions of the art make up his books, 3 of which were on display from Warren's collection. Sara was taken with the work of Ms. Lee, which was eyepopping in color. Much of the artwork is for sale.

Due to the smaller size of the show, many pieces couldn't be displayed, but Pedro took us back to look through them. If you're interested, I would imagine arrangements can be made with the gallery. One could probably buy the book from them through the mail as well, and perhaps the other publications.

There's a blog by Craghead at http://imperaetdivide.blogspot.com/ which has pictures as well.

Here's my photographs, largely taken as a mnemonic device for writing a review: 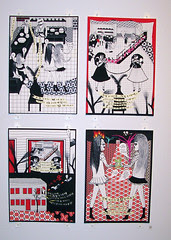 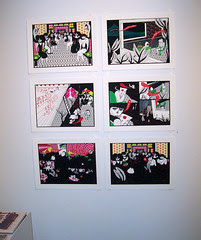