Watchmen: The Art of the Film book review 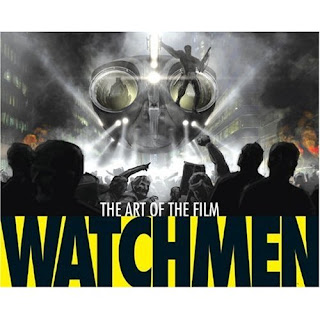 Unsurprisingly, The Art of the Film complements and somewhat overlaps The Film Companion. It focuses more on the film’s design and special effects. Of special interest to comic book readers is concept art by Adam Hughes, David Finch and John Cassaday, prop art by James Jean and new art by Dave Gibbons and colorist John Higgins including three pages drawn as a new alternative ending to the comic book, and thus the movie.

The only word to describe this movie, and this resulting book is ‘lush.’ An ad for The Veidt Method (Page 13) quotes comic books’ one-time ubiquitous Charles Atlas self-improvement ads. Dozens of prop newspapers hang in a hallway, with decades spanned in their headlines, waiting for approval to use in the movie. Production manager Alex McDowell explained part of the rationale for such detail, “This film is interesting because environments really have to represent the characters iconically, because you are in this very complex, fluid time stream back and forth. You need something to ground you when you cut back to something that’s 1970 or ’77 or ’85.” (p.28-29) The small black & white television shown in the original Nite Owl’s apartment on p. 39 is actually the same model that this reviewer had in his bedroom as a teenager.

The Introduction chapter gives the basic rationale behind the design and look of the movie. Concept Art has the initial redesigns of characters, the storyboards and the new ending by Gibbons and Snyder. Several pages focus on James Jean’s painting of Silk Spectre I’s World War II propaganda poster. Jean painted her in both Norman Rockwell and Vargas’ styles. Production Art focuses more on how a scene is actually laid out and what it will look like – an example is the cemetery for the Comedian’s funeral which is shown as a painting and a set of elevation drawings. This leads naturally into the Sets chapter, which again shows design artwork and stills from the finished movie; here a good example is Dr. Manhattan’s apartment or Adrian Veidt’s office.

Props drills down into more detailed pieces especially, and unsurprisingly, weapons although it also includes the newspapers seen waiting for approval in the Introduction, Rorschach’s diary, Watchmen action figures from Veidt’s office (sculpted for the film by Neville Page, but the viewer can now own a set as a result of the movie, as reality and fiction intertwine). Moore and Gibbon’s original story had a secondary story running through it – a knock-off of an EC pirate horror comic called The Black Freighter. Interleaving that into the movie would have been impossible, so Snyder created an animated direct-to-video version which went on sale before The Watchmen opened. A few pages show artwork from the ‘comic book’ and the resulting animation.

The Owlship, a flying version of Batman’s Batmobile, gets a chapter to itself, as do Costumes. Both are filled with production artwork and the final results. The book ends with a look at the multiple poster campaigns designed for the movie. Like The Film Companion, this book is well-done and should appeal to those interested in more information than the movie alone could provide.
Posted by Mike Rhode at 6:09 PM