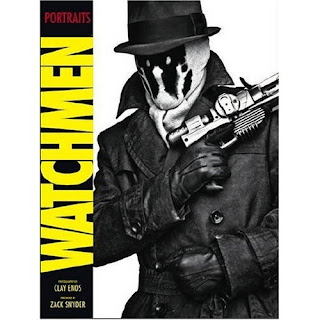 Portraits is the oddest of the three books that Titan published as companions to the movie, but it also has the highest production values and is physically the largest of the three. Clay Enos was the official still photographer, but also decided to shoot sets of portraits of both the actors in costume and the people working on the film. He shot in black and white, and used harsh lighting and a white backdrop, so every pore and hair can be seen. This gives the images a curious effect as though Richard Avedon decided to photograph superheroes. This is added to by the juxtapositions of the crew members and actors – “2nd Assistant Camera” is followed by “1940s Store Owner” who is followed in turn by “Captain Axis” all in hyper-detailed photographs. In his foreword Snyder says, “Not only do these pages immortalize individual cast and crewmembers, but they also celebrate in particular the exceptional work of our talented costume, hair and make-up departments. But beyond even that, the photos of the actors in costume capture something more. What at first glance simply might appear to be an extra dressed up as a general for a day, reveals on closer study the decades of a career spent in uniform.” Snyder’s point is somewhat undermined by the lack of identification of everyone, including him, by name. They are only identified by position. However, Enos decided to follow his muse, and a book and traveling photograph exhibit have resulted. I am not sure who this book will appeal to, but I appreciate the fact that Enos thought outside of the job he was hired for to create it.
Posted by Mike Rhode at 5:06 PM

thanks for the review.

It was a quick one to make the print edition of the International Journal of Comic Art's deadline. I try to avoid seeing what other people have written about books before I write a review, but I see you've got a blog:
http://blog.clayenos.com/ and somebody else used the Richard Avedon analogy - http://www.pdnonline.com/pdn/content_display/photo-news/photojournalism/e3i55545185203bc0b1d5f5eba0537dccc1
Really I came up with it on my own!

It'll be interesting to see if you keep getting hired for superhero movies now.

and you can buy his Nite Owl coffee
http://www.organiccoffee.com/Nite-Owl-Dark-Roast/M/B001O2KSZA.htm