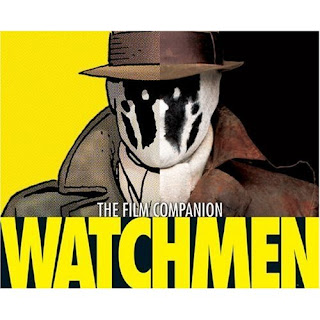 Watchmen, a movie that I thought would never be made due to its absolute need for familiarity with comic book superhero tropes, is generating merchandising and spinoffs just like the original comic books did over two decades ago. The movie audiences’ familiarity with DC Comics characters such as Superman and Batman apparently carried over to acceptance of the Watchmen characters which Alan Moore and Dave Gibbons had based on Charlton Comics’ superhero knockoffs of the DC heroes.

Titan Books has put out some handsome volumes on the making of the movie. To long-time American readers, Titan was best known for repackaging DC and Marvel comics for the British market, frequently collecting material like Neal Adams’ Batman in black and white. More recently, they have been the source for reprints of British works including comic strips like the excellent James Bond series. Now, as it publishes high quality books about the making of movies based on comics, the company has moved into a market held by Chronicle Books and Hyperion. This business decision was probably partly motivated by the success of books such as “The Art of (Our New Animated Movie)” which now accompany every new animation release.

The Official Film Companion is a lovely book. It is largely a photography book with a small amount of text, as these books tend to be. The printing is of excellent quality, and is far higher than earlier books of this type such as those that came out for the first Batman series. The book is divided into seven chapters: Pre-Production, World of Watchmen, The Characters, Production, Post-Production, Making Manhattan and Conclusion.

Pre-Production features some interesting artwork by other comic book artists, but is mostly devoted to background material such as set and prop designs. World of the Watchmen demonstrates the inherent difficulty of a book like this – the ‘history’ of the Watchmen’s world is written straightly and shown in photographs. Then director Zach Snyder is quoted. “What does [being a superhero] do to you?” Snyder asks … “Does it make you crazy? Does it make you a recluse? Does it make you lose touch with humanity?” (p. 38). The book then continues on describing the formation of the Minuteman team in the 1940s. The Characters, a chapter describing each one in some detail, has the same problem differentiating between the character’s reality and the actor’s reality. The next three chapters examine how the movie was actually made, especially the special effects. The chapter on Dr. Manhattan has many pictures of the motion-capture suit, and decisively settles the issue of how much of Billy Crudup’s anatomy is actually shown on the screen: none, except for his face.

Overall, this is a very well-produced, typical example of this type of book. If you are interested in knowing more about the film, or if you like looking at cool photos of props or special effects, you’ll find something of interest in the book.

Soon to come - reviews of The Art of the Film and Portraits.

Thanks to Katharine Carroll of Titan Books for providing review copies. A revised copy of this review will run in the Fall 2009 International Journal of Comic Art.
Posted by Mike Rhode at 9:06 PM