Mike Carey interview in Express and at Olssens UPDATED 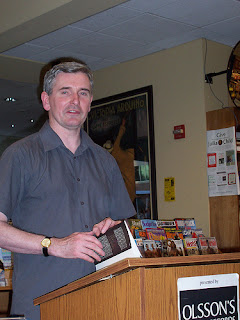 Comic book writer Mike Carey who did 3 signings in town today, is also interviewed in the Express, the free paper in the yellow bins. Scott Rosenberg did the interview.

I went to the Olssen's signing after work. Mr. Carey was a bit late, having made the crucial mistake to attempt 14th St at Pennsylvania Ave at rush hour. However, he arrived and in his soft British accent, even though it was 12:30 AM according to his watch, read most of a chapter of his new novel, The Devil You Know. This is the first book in a six-book series about an exorcist detective who's trying to figure out why ghosts are suddenly returning to the real world. 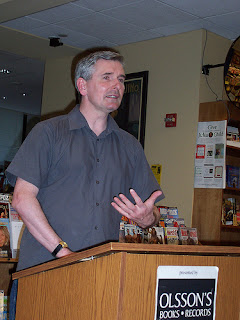 He took questions as well - even though I asked four of them, I'm spacing out now. I should have taken notes. Anyway:

Even though it appears that he's doing a lot of work now, some of it's just appearing. Wetworks was written years ago, this new novel he's working on is actually the fourth in the series and two are already out in the UK (and can be bought from Amazon.ca). He's writing 4 comics now, and that's as many as he thinks he can write. He's also doing that 4th novel and a screenplay.

Some time ago he wrote animation in the UK about a fairy Romeo and Juliet, called Meadowlands, iirc. The dark elf nasty Romeo, who was 2 inches tall fell for the fairy Juliet on the other side of the meadow. This has been in animation limbo for quite some time but a UK company is supposedly finishing it. 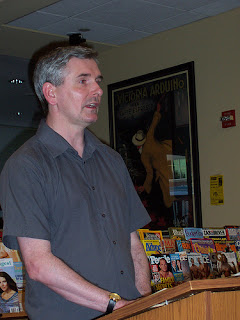 He's doing 1 comic for Virgin, and apparently it's a big success in India if not in the US or UK. He's working with his former Marvel editor and likes the pay so he's enjoying the work.

Comic book editors differ from book editors in that they guide the story, up to the point of flying all the X-Men writers to an undisclosed location and locking them in a room in January 2006 until they script out the next year or so. Tom Breevort can be the tie-breaker in differences of opinion due to his encyclopedic knowledge of the X-Men. Book editors just make sure your story makes sense. 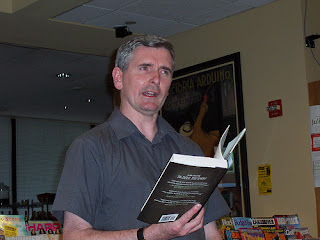 He was a comic reader from way back and loved the Lee/Kirby Fantastic Four so for him writing comics is not an exercise in de- and reconstruction like it is for Moore, Gaiman or Millar. He likes a good straightforward superhero story.

He originally wanted Psylocke in his X-Men title, but Claremont did too, so Carey got Cable. He warmed to the idea after reading a Cable / Deadpool story arc, and is enjoying writing the depowered pathetic ex-omnipotent character. I haven't read X-Men since before Cable was introduced, so someone can post a comment clearing that up. 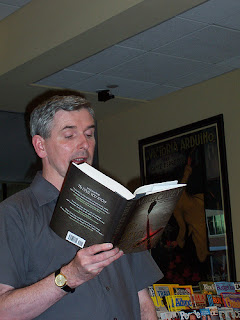 He writes women well (according to an audience woman) and credits that to having a fifteen year old daughter, who in Lucifer got to ascent to godhood. And also to liking women. The audience seemed to agree that was a good thing.

Speaking of the audience, in attendance were Karon Flage, director of the Small Press Expo; Jason Rodriguez, editor of Postcards and soon to host an Olssen's signing of his own (the book looks great); Chris Shields, cIndy podcast interviewer of cartoonists; Randy T the DOJ scout who passes me some of these stories; Scott Rosenberg, the Express reporter who started this post; comics journalist and writer Greg McElhatton and Carey's nephew. I had to google Greg to figure out how to spell his last name, so here's an article about him. Apologies to any local luminaries I missed. I enjoyed talking to everyone. If anyone can add more anecdotes, please do so below.
Posted by Mike Rhode at 9:55 PM