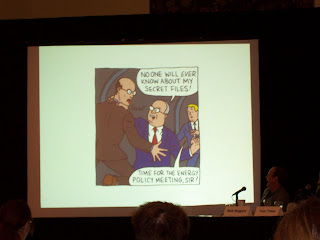 At Tuesday's Cartoonapalooza session, Reuben Bolling said the Post won't be running this week's Tom the Dancing Bug strip on Dick Cheney. It's online now, so you can see the strip the Post thought was piling on poor Dick after their reporters 5-days of articles about the V-P's creation of a fourth branch of government that certainly isn't the fourth estate. Bolling showed the censored strip which was of Cheney killing his aides when they brought bad news, but now we can all enjoy it.

Tom Spurgeon linked to my first post on this and reasonably said that he's not quite sure this is censorship and running one cartoonist over another can be a reasonable editorial policy. I don't disagree with that, but I do think when you choose not to run the strip the artist submits, for an admittedly political reason, and then run another older strip by the same artist, that's censorship, not just editing. But thanks for noticing Tom! Tom's got one of the two best blogs for consolidating comics news reports on the web and his site should be read every day.

To recap, as I've noted before, The Post has a pattern of censoring comics and not telling its readers as I reviewed here a few months ago.

UPDATE (after checking my notes): Just to show the Post is not alone, Ruben mentioned that the Richmond Post-Dispatch always drops the strip when God-man is featured.
Posted by Mike Rhode at 9:58 PM