Matt wrote in to say, "The Meat and Potato Theatre (meatandpotato.org), a small, alternative theater in D.C., commissioned me to do an illustration to promote its fall presentation of 'Rashomon.' (They wanted a Frank Miller-like image with a good amount fo red stuff). I've attached the final approved image, which will appear on postcards, newspaper ads and, I hear, on the Metro, too. 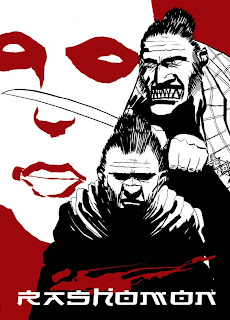 I've also attached the initial illustration that landed me the gig. I kinda like it--it has a sense of apprehension about it, with the bandit lingering behind the samurai, just about to slash him."